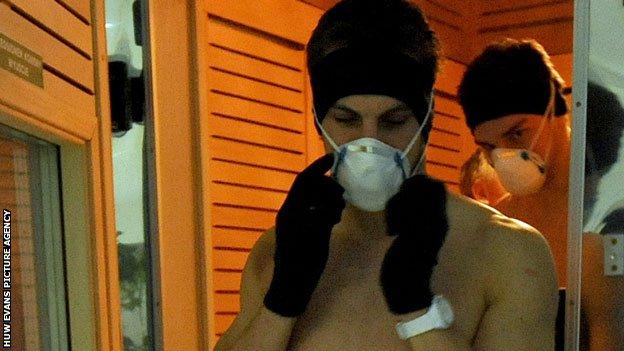 Wales' trips to Poland for cryotherapy sessions have gained an almost mythical status since the 2011 World Cup.

Warren Gatland, the Wales coach, packed his squad off to Spala before the World Cup in New Zealand, where his side lost to France in the semi-finals, and to Gdansk on the eve of a Six Nations campaign that now sees them on the verge of a Grand Slam.

Now a new mobile cryotherapy unit has accelerated behind the return of inspirational captain Sam Warburton from a knee injury for Wales' Grand Slam clash with France at the Millennium Stadium on Saturday.

"Sam did cryotherapy all last week and has done it this week," said Adam Beard, the head of physical performance of the Welsh Rugby Union.

Cryotherapy chambers allow players to train upto three times a day and sees them subjected to temperatures as low as -160C for a three-minute session. The release of endorphins triggered by the low temperature speeds up their physical recovery.

Warburton damaged medial ligaments in his knee during the 19-12 victory over England at Twickenham which saw Wales lift the Triple Crown and he missed his side's 24-3 victory over Italy in Cardiff last weekend.

The openside flanker has been using the mobile cryotherapy unit three times a day for three and a half minutes at a time in his bid to lead Wales in a re-run of the World Cup semi-final clash in Auckland last November. He apparently calls it the "evil sauna".

It may be uncomfortable for the players, but Beard backs the benefits of a recovery regime which has become synonymous with Gatland's Wales and has seen a batch of players return early from niggling injuries to take their place in the starting line-up.

"If a knee or a leg is inflamed, it stops that," said Beard. "It enables him to train and the big thing is that it allows you to carry on getting treatment.

"Normally, if you have an injury, it will swell after training and cryotherapy stops that inflammation and allows him to keep training.

"I have seen players, like Rhys Priestland and Jamie Roberts, come back a week early after a session.

"It allows a player to also work with the medical and fitness staff too and all of it combined together is what gets him back fit - it's the small extras that make a big difference."

Wales returned home from New Zealand in 2011 having earned a reputation as being one of the fittest and most physically intimidating in the tournament, but the trips to Spala and Gdansk had very different purposes.

"At the Rugby World Cup it was a pure pre-season and all about developing our physical qualities," said Beard.

"When we went to Gdansk it was about refreshing things and topping certain players up but the second part of the trip was all about rugby fitness for international rugby."

Beard, though, is quick to dismiss the idea of cryotherapy being the reason behind Wales' recent resurgence and their performances in the World Cup and in this Six Nations campaign. But he does credit it as being one of the "one percenters" every side is searching for.

"The cryotherapy is one of the best recovery methods but it doesn't provide anything more than that," said Beard.

"There is a myth that we do it after every training session - we don't. The body can adapt and if we do it too often the players body's would adapt to it too and we would lose the benefits of it.

"It is all about matching the science with the art."

The Australian reveals discussions are taking place about building a cryotherapy chamber at the WRU training base at the Vale of Glamorgan Resort but also that other sports are now talking about following Wales' lead in adopting the treatment.

"We are talking about having a chamber put in at the team hotel, which can have four or five guys in at a time," said Beard.

"I have talked to some of my colleagues in other sports at international level and I know their athletes are now asking why aren't they doing what Wales are doing?"