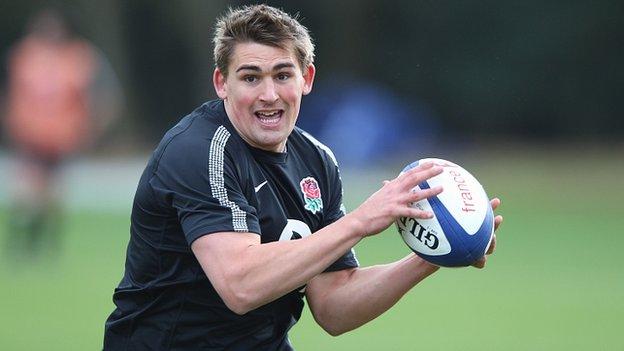 Leicester fly-half Toby Flood has been left out of the England squad for their final Six Nations match against Ireland at Twickenham on Saturday.

Flood is one of seven players who have been released back to their clubs.

Number eight Phil Dowson remains in contention despite being knocked out in the closing stages of last weekend's 24-22 victory over France.

David Strettle, who was injured for the France game, and his replacement Charlie Sharples are both included.

England interim head coach Stuart Lancaster will confirm his starting line-up when he names his match-day 22 on Thursday.

Owen Farrell started at fly-half against France, with Saracens' team-mate and fellow number 10 Charlie Hodgson on the bench.

Lancaster said: "With such a short turnaround after Paris the lads have had to really re-focus and we are pleased with how they have applied themselves to reviewing the game and training today.

"We'll meet again on Wednesday night but it's important to recognise the contribution of those not coming back into camp.

"This has been a collective effort, not just the 15 who have started games, or the 22 in the match-day squads but 30-plus players who have all bought into what we are trying to achieve.

"We are committed to the journey we are on. The next time these guys will all get together is ahead of the South Africa tour and we wish them well at their clubs for the rest of the season."

Farrell has impressed for England so far, with his work ethic, temperament, control and goal-kicking earning him comparisons to record points-scorer Jonny Wilkinson.

Another similarity is his ability and desire to get stuck in, a side of the game he particularly enjoys.

"I enjoy getting stuck in. I would not like people to think I'm a weak link in defence," said Farrell.

"I am not particularly (trying to emulate Wilkinson) but obviously you realise that for a fella playing fly-half, going around putting all those big hits in, it was brilliant to watch.

"Everyone has to make tackles. Defence allows you to be very physical, especially the way we defend."