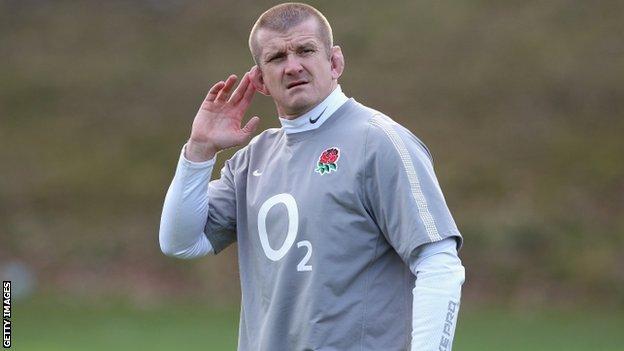 Graham Rowntree says that it is "beyond strange" that England's coaching staff go into the final Six Nations game against Ireland with their futures unresolved.

The Rugby Football Union have postponed the recruitment of a new permanent head coach until after the tournament, but forwards coach Rowntree admits that the impasse is frustating.

"All we can do is try and do our jobs to the greatest of our ability. Of course it is [strange] - but we are beyond strange," he said.

He says that the uncertainty over his own future as part of current interim boss Stuart Lancaster's coaching staff is affecting his family.

"She is frustrated because there is a lot up in the air at the moment.

"It is not just us. There are 20-plus guys in the management who are all saying 'What will we be doing in six months' time?'"

Lancaster and former Italy coach Nick Mallett are the frontrunners for the England job, after former South Africa coach Jake White ruled himself out for the position.

The temporary coaching team of Lancaster, Rowntree and Andy Farrell have overseen a transformation in England's fortunes since last autumn's disappointing World Cup in New Zealand.

England head into the final weekend of the Six Nations with an outside chance of winning the title, after Sunday's 24-22 victory over France.

They must defeat Ireland at Twickenham on Saturday, hope that France beat Wales and overturn a points difference of 38 to win the championship.

Rowntree says that he has enjoyed working as part of a smaller coaching team alongside Lancaster and Andy Farrell.

"We are covering a lot of bases with fewer coaches and I think it is the way forward. It does mean having to work 16 hours a day but it has been fantastic," he said.

"This system works for us. I was part of a larger coaching team before [under Martin Johnson] and our record was quite successful. We had some famous victories.

"But for this group of coaches it has worked well. Stuart has a very simple philosophy on things - get good people in who want to work for each other.

"Defensively, he has instilled that selflessness. He is a selfless guy, a very humble man. He works exceptionally hard. You wouldn't believe how many hours a day he works.

"He has brought a good environment, good people, simple messages and he has involved the players.

"It has been incredibly fulfilling and enjoyable and we have not achieved half of what we can do. That will come as experience."