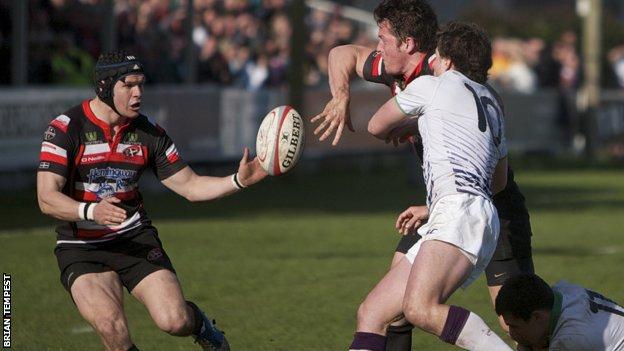 Cornish Pirates boss Chris Stirling says he is struggling to get enough fit players to make up his 22-man squad for Friday night's trip to Bedford in the Championship play-offs.

The club's dual-registered Exeter Chiefs players have been called back to Sandy Park while 13 others are injured, including nine backs.

"We're struggling to get a 22 together for the weekend," Stirling said.

"But we've got to battle on," he told BBC Radio Cornwall.

"I take my hat off to the guys who are having to play out of position, they're putting their hand up and saying 'I'll do it' and you can't ask for more commitment than that."

On a positive note hooker Rob Elloway having recovering from a neck operation.

But dual-registered Exeter players Dave Ewers, Tom Cowan-Dickie and Lloyd Fairbrother have gone back to their parent club while their Chiefs teammate Sam Hill is playing for England Under-20's.

Centre Tom Cooper was injured last week to join eight other backs and three forwards on the sidelines, and with the transfer deadline for Championship clubs having passed, Stirling is worried should any more of his players go down.

"If we get any more injuries we're in deep trouble because you can't bring anyone else in.

"We've just got to go out and hope that we get through the next 80 minutes of rugby and don't get anyone injured."

And despite the Pirates 14-14 draw against Leeds, which Stirling described as 'rubbish', he is still aware that the club is unbeaten in eight games.

"Even though we didn't play well, we didn't lose and we're unbeaten in the last eight matches so you've got to look at that as positive.

"If we can come away with a win away at Goldington Road then we're going to be looking really good."