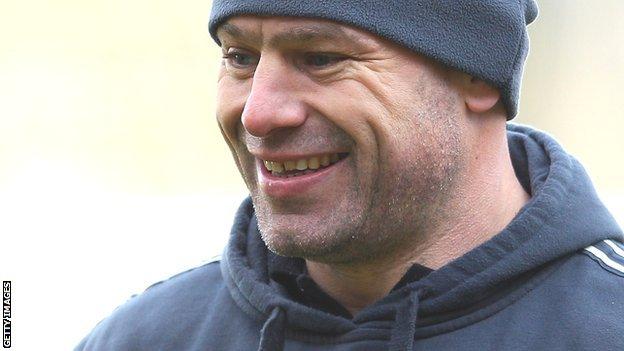 Director of rugby Richard Cockerill says Leicester's unexpected progress to the LV= Cup final has done wonders for their togetherness.

A mixed side based mainly around a core of younger players has surpassed all expectations to reach Sunday's final against Northampton at Worcester.

We have always tried to have the approach that whoever is available and playing, then that is our best side

"It makes a massive difference to the spirit of the team and the squad," told BBC Radio Leicester.

"Everybody has now contributed to what will hopefully be a successful season."

Teenage fly-half George Ford has been one of the star players with some eye-catching displays, including a mature performance in Tigers' backs-to-the-wall victory over Bath in the semi-final.

Cockerill has also included one or two of his more experienced players during the run to the final at Sixways.

But he has generally used the competition as a chance to play youngsters, fringe players and to give much-needed game time to those returning to fitness after injury.

"I am delighted," Cockerill added. "It just keeps the whole squad together.

"They have all had an opportunity to play and be successful - which is a very important factor - so the squad is in good spirits.

"It's been great for the club. It's been a hard season for all sorts of reasons but we've kept a pretty measured view and the boys have kept doing what they have been doing.

"Thankfully we have a little bit of a reward getting to a final but it's one we'd like to win now.

"We are playing Saints and that's as big a driver as anything to want to win.

"If we win this Sunday, one, we beat Saints, and two, we get a bit of silverware. And that will set us up nicely for the Premiership run-in."

And Cockerill has once again promised to keep faith with the players who have helped the club make the final.

Many expected the Tigers chief to make sweeping changes for the semi-final win over Bath but he was not tempted to mix things up.

"We said it was a mixed side but a good side," Cockerill explained. "We thought it was a side that could win.

PATH TO THE FINAL

"It was close, we were under pressure and it could have gone either way. We could have lost it but the guys had the attitude to go and win.

"On paper Bath should have won that game hands down. They had opportunities but we had enough about it to keep in there and fight hard enough to get the win.