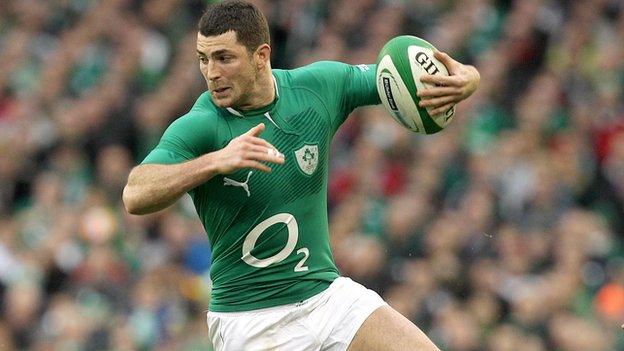 Rob Kearney believes the reason for Ireland's impressive Six Nations record against England is simply because they are the superior side.

The Irish full-back is hoping for an eighth win in nine championship clashes in Saturday's meeting at Twickenham.

"If you are winning so many games against them it probably means you're a better side," said Kearney.

"I'd like to think that trend will continue on Saturday and that we remain the better team."

He added: "England are probably outdoing themselves in this Six Nations in terms of the expectation levels they had coming into the competition.

The St Patrick's Day celebrations will begin in earnest should the Irish storm Twickenham in the climax to the Six Nations.

The fact it's on St Patrick's Day just adds a little more spice to it.

The winners will finish championship runners-up, with England's chances of retaining their title remote at best.

Kearney insists France in Paris was the fixture he wanted to win most of all, but Ireland had to settle for a 17-17 draw.

"I'm a lot more excited by this weekend because England is the one clash we all love and it is the one, being Irish, you get excited for," said the 25-year-old.

"The fact it's on St Patrick's Day just adds a little more spice to it. That huge rivalry we have with England will still be there in 50 years' time.

"It is something we have built into us as Irish people and it's important to try and use that to our advantage this weekend.

"In the build up to the game we won't speak about the rivalry, but some things don't need to be said.

"That's not to say there's not rivalry against all the other teams because there is, but there's something about England fixtures that just spices things up."