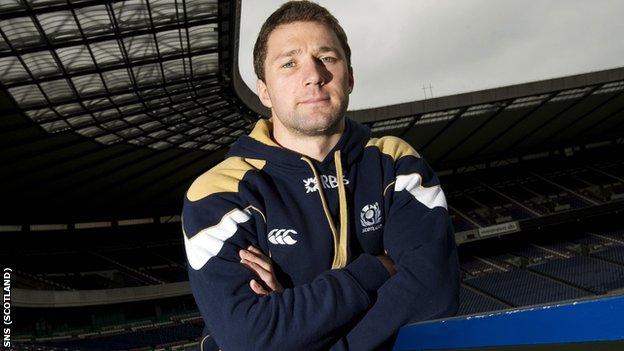 Chris Cusiter insists Scotland's players are not dwelling on the possibility of ending this year's Six Nations with the Wooden Spoon.

The Scots and Saturday's opponents Italy are both looking for their first win in this year's championships.

"We don't talk about that," Cusiter told BBC Scotland.

"We talk about winning this game. It's the last game, we've not won thus far. It's the last opportunity and it's a huge game we're focussed on winning."

Cusiter will begin the match at the Stadio Olimpico in Rome on the bench with Mike Blair starting at scrum-half.

"It's a huge game for us," said Cusiter. "We're sitting on zero from four. We've played a lot of good rugby and we've made mistakes at critical times so this is one last opportunity to get a win.

"We're aware of how tough it will be to win over there, how much improvement Italy have made - particularly looking at their last game against Wales. Defensively, they're very, very strong.

"It's a tough unforgiving championship and if you're not right on the money for 80 minutes, you don't get the wins and that's how it's gone for us thus far but we're looking forward to trying to put in our best performance of the championship.

"We need an 80-minute performance with no big mistakes as we had last week against Ireland. We believe we can win."

As well as trying to avoid the ignominy of finishing bottom of the table, Scotland are trying to improve upon their record of two wins on Italian soil in 12 years.

However, Cusiter believes playing at a new venue can help the Scots triumph.

"They've taken a few scalps over the years in Rome," added Cusiter.

"They beat France in the penultimate game last year. They've beaten Wales. You know that you're in for an absolute battle for 80 minutes.

"In the past we've put ourselves in good positions and then made one mistake, certainly two years ago, which has cost us the game.

"They're very good at putting pressure on. They've very stuffy in defence, very hard to break down and you'll never really get away from them so you have to grind it out, believe in what you're trying to do and go for 80 minutes.

"I'm sure there'll be a lot of travelling support. We haven't played in this stadium before so the history of what's happened in the last 12 years in the Six Nations doesn't come into it.

"We've had some tough defeats over there, games that we feel we maybe should've won. We're starting afresh."