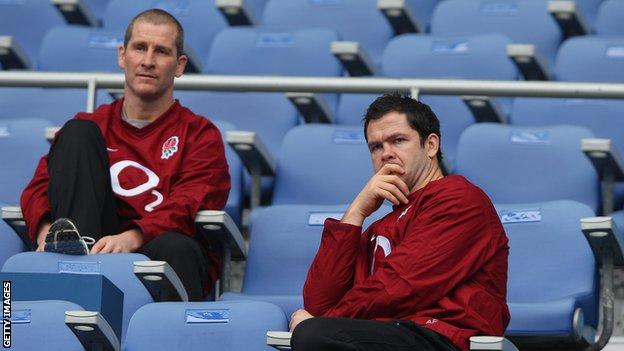 Farrell, who is first-team coach at the Premiership champions, has helped oversee England's Six Nations campaign as part of Stuart Lancaster's staff.

"When England asked us if he'd be available for the Six Nations, in the national interest we agreed," Griffiths told BBC Three Counties Radio.

Andy was loaned to England for the Six Nations, is contracted to Saracens and is a huge part of our future going forwards

"We've heard nothing more. He remains contracted to us."

Griffiths added: "As far as we're concerned he's a huge part of our future and he's contracted to that future."

Lancaster, the interim England head coach, has been interviewed by the Rugby Football Union for the permanent role after securing wins over Scotland, Italy and France.

England have won three away Six Nations matches for the first time in their history under the team of Lancaster, Farrell and fellow coach Graham Rowntree.

Lancaster would be expected to request the presence of former dual-code international Farrell in his backroom team, should he be offered the role permanently.

But when asked whether Saracens would stand in the way of Farrell departing, Griffiths said: "That situation is not arising.

"We're a club that tries to align ourselves with the interests of the individuals in the club.

"But the situation with Andy is relatively straightforward. He was loaned to England for the Six Nations, is contracted to Saracens and is a huge part of our future going forwards."