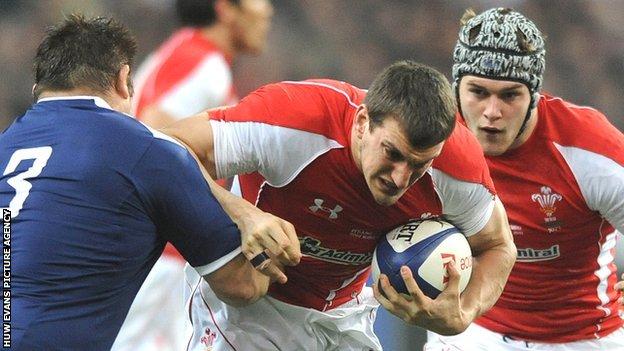 Wales captain Sam Warburton says Saturday's Six Nations clash with France at the Millennium Stadium will be the pinnacle of his career so far.

Open-side Warburton missed last week's 24-3 win over Italy with a knee injury but has been passed fit for the chance to emulate the heroes of his youth.

"When you watch those moments it's something you always want to take part in.

"Every time I trained when I was a teenager you want to play in games like this, so that's why I feel so lucky and privileged to be here.

"I'm feeling great, really happy with the way it [my knee] has responded... back to normal."

The return of fit again Blues flanker Warburton is the only change Wales coach Warren Gatland has made to the starting XV that beat Italy.

Justin Tipuric proved an able deputy against the Azzurri and is unfortunate to drop out of the match-day 22, with Ospreys team-mate Ryan Jones getting the nod on the bench as he can cover more positions in the pack.

While being delighted to have his captain back in the side, Gatland also had praise for Warburton's back-row colleague Dan Lydiate as the Dragons player again dons the six shirt to win his 24th cap.

"He's definitely an unsung hero," Gatland said. "There's not a lot flashy about Dan but last week [against Italy] I think we only made 65 tackles of which he made 10 himself.

"He does a lot of the donkey work I suppose to make others look good and you need that sort of person, you need more than one of those people in your squad - the glue that holds everything together.

"He's probably a little bit in the same mould that [former British and Irish Lions back-row] Richard Hill was with England when England were going so well.

"Dan has done incredibly well for us; he's a great athlete, he's worked hard at his game, he's a great professional and he's important to us."