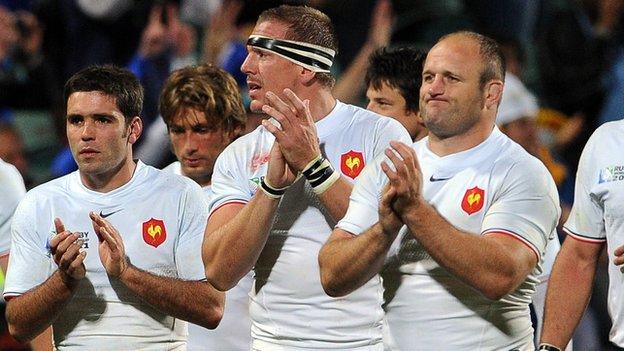 They hope to prove their 9-8 World Cup semi-final win over Wales was no fluke while giving retiring William Servat and Julien Bonnaire a winning send-off.

The number eight said: "We have a lot of motivation for this match and we don't want Wales to do the Grand Slam.

"I know for them it's [about] revenge for the semi-final and for us we want to show it wasn't a fluke."

Controversy raged about events in Auckland where Wales captain Sam Warburton was sent off early on for a tip tackle on wing Vincent Clerc.

Warburton accepted referee Alain Rolland made the right decision, but Wales fans believe they would have reached the final had the flanker stayed on or been sin-binned.

But Harinordoquy says the sending off also affected France for the rest of the game.

PREVIOUS MEETINGS IN THE SIX-NATIONS CHAMPIONSHIP

They went on to lose by a point to New Zealand in the final with many observers believing they had out-played the tournament hosts.

"We did not play after that because we thought the game was won," Harinordoquy told the Sport Wales programme that will be screened on Friday night on BBC Two Wales.

The Biarritz star says France are also motivated by a desire to give both retiring 31-year-olds Servat and Bonnaire a memorable final game.

France also hope to prove they can play great rugby at the end of a campaign in which their title hopes disappeared in a draw against Ireland and defeat by England.

"We want to offer a good match and a good win to [flanker] Julien Bonnaire and [hooker] William Servat because they play a long time for the French team and I think we had to do this match for them.

"We are disappointed but we want to show that we are able to produce great rugby and don't give easy points to the opposition, like we did against England, for example.

"So it is a big match with two teams who want to win it - but we won't give them the match."