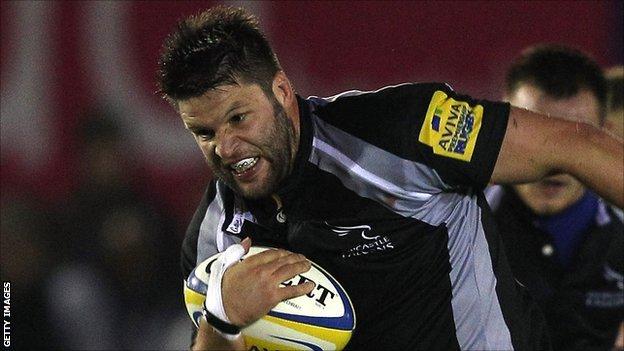 The Scotland international, 29, has been a regular for Falcons this season with 26 appearances in his second campaign with the Premiership side.

"[Owner] Semore Kurdi's vision for the club excites me and that was a key factor in wanting to stay," said Hogg.

"The supporters are really good up here too and they have really driven this club forward."

Hogg's commitment to the Falcons follows that of Jimmy Gopperth and Mark Wilson, as well as the appointment of former Leicester and Harlequins head coach Dean Richards for the 2012-13 season.

Meanwhile the current Falcons side, coached by Gary Gold, continues to battle against relegation, with the club still eight points adrift with five games to play.

"It has been a great feeling to play at Kingston Park in the last few weeks and the fans have been fantastic," Hogg added.

"Supporters can see how improved the performances have been of late and the club is certainly turning a corner.

"The new coaches have changed things quite a bit and the next five games are crucial if we want to be playing Premiership rugby next season."