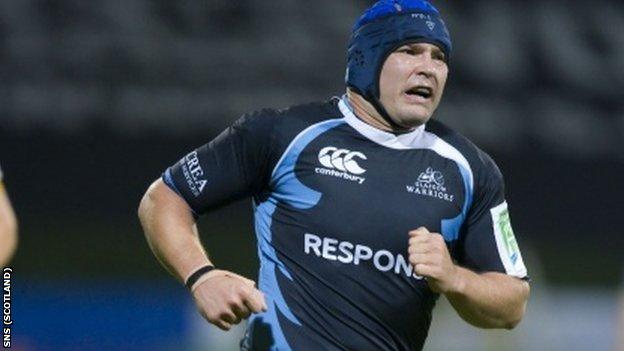 Hall told the club website: "This is a great time to be part of Glasgow Warriors and it was a straightforward decision to remain here and help the team progress.

"I'm excited about the group of players we're assembling. I think we're in a really good position to kick on."

Glasgow are fourth in the Pro12 as they aim for a place in the end of season's play-off semi-finals.

"I feel like I'm in the prime years of my career as a hooker and the competition that exists in my position is great for the Warriors as a whole," said Hall.

"There is a real sense of this being a club going places and we've got a big chance to prove that in the here and now by maintaining our push for the play-offs, continuing with next Friday's home game against Aironi."

Hall was an apprentice with Glasgow Caledonians and a professional with Glasgow Rugby before moving to Edinburgh in 2002.

He switched back to the other end of the M8 in 2007 and has been a mainstay ever since for the Warriors.

Hall has won 37 caps for Scotland, most recently against Argentina at the Rugby World Cup last year, but has fallen behind new captain Ross Ford at national level.

Glasgow head coach Sean Lineen said: "Dougie is one of our most experienced players and it's great to know we'll be able to call on that expertise going forward.

"We've been delighted with the way that he, Pat MacArthur, Fergus Thomson and Finlay Gillies have challenged each other this season.

"That sort of internal rivalry puts pressure on each individual to keep their standards high and the team then reaps the reward."