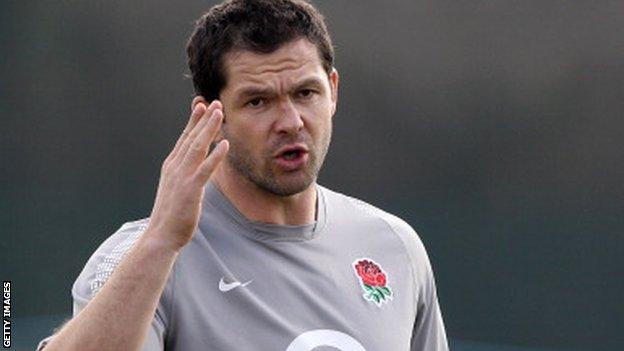 Assistant coach Andy Farrell says England are not intimidated by Ireland's recent record against them.

Ireland have beaten England in seven of their last eight Six Nations matches.

But England have already beaten Scotland at Murrayfield for the first time in eight years and ended France's 10-game unbeaten home record.

"Ireland have a good record here but that means nothing to this England group," said Farrell, who will return to coach Saracens after the game.

"There seems to be a challenge every single week but these boys aren't frightened of anything. We are up for any type of challenge. We don't know fear."

Farrell said he was not surprised by the performance of the England side, even though nine players have made their international debuts under interim head coach Stuart Lancaster.

"Maybe a few other people have had their expectations exceeded but not ourselves," added the former Wigan and Great Britain rugby league star.

"We were always confident we could get results. You are judged on performances as well and they've been very good.

"Our initial expectations were for this young side to develop week-in and week-out, to get used to the international environment.

"We were always confident in the selections we made along the way.

"We picked on form, for the here and now and for the future."