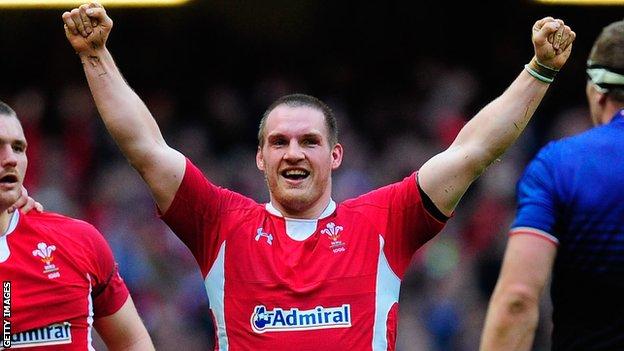 The pair, along with prop Adam Jones, are among an exclusive group of Wales players to have won three Grand Slams.

The third clean sweep in eight seasons was sealed with a 16-9 victory over France at the Millennium Stadium in Cardiff on Saturday.

"It's just great for this group of players," said Jenkins.

The experienced trio were in the 2005 and 2008 Grand Slam sides, while Gareth Edwards, JPR Williams and Gerald Davies achieved the same feat in Wales' so-called golden era of the 1970s.

Jenkins, 32, Adam Jones and Ryan Jones, both 31, are among a Wales team well-represented by young players, including 21-year-old Alex Cuthbert, who scored the only try of the game to gain revenge for the World Cup semi-final defeat against France in October 2011.

"It wasn't the best of games [with] a lot of kicking involved. Our defence stood out and we managed to grind out a win," said prop Jenkins who took over as captain for the second half after Sam Warburton's withdrawal with a shoulder injury.

"We knew they [France] were going to be good. They've played well all Championship and it was up to us to perform on the day.

"The occasion didn't quite get to us as they would have hoped.

"The atmosphere was unbelievable and it's great for us to win another Grand Slam.

"The coaches give us freedom to go out and play. We're quite a close group [and] the World Cup obviously brought us tighter.

"Our loss to France spurred us on today to get revenge and it's a great achievement for us."

Jones, who captained the Grand Slam winning side of 2008, was a half-time replacement for current skipper Warburton, who suffered a shoulder injury.

And Jones said the victory over France capped a memorable Six Nations campaign for Warren Gatland's side.

"For nine weeks they've been nothing short of superb," said Jones of his team-mates.

"They came into this campaign possibly as favourites with a goal and they've worked incredibly hard and they've achieved it.

"I take my hat off to every single one that's played even the smallest role. Everyone's contributed to this.

"It's something we'll reflect on and treasure and will be ours for years."