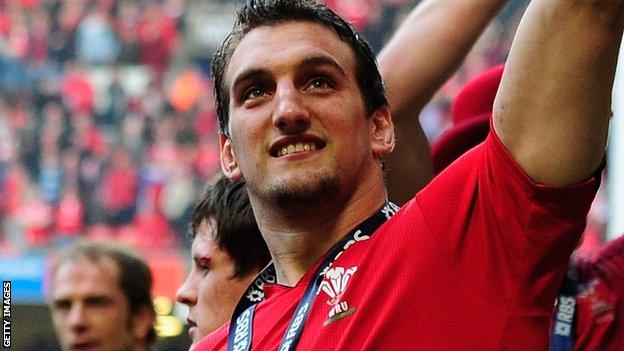 Sam Warburton is set to return to action in six weeks after receiving reassuring news on his shoulder injury.

Wales' Grand Slam winning captain has suffered "no structural damage" and could be fit for Cardiff Blues' final game of the season against Scarlets.

Warburton's return for the Blues would pave the way for him to lead Wales in June's three-Test tour in Australia.

"Hopefully I can see some more rugby before this season ends," said the 23-year-old flanker told BBC Sport.

Warburton sustained his injury during Wales' 16-9 win over France. In the immediate aftermath of Wales' Grand Slam victory, he cast doubt over his involvement in the summer tour as he feared a lengthy absence.

The battered skipper was unable to lift his right arm above his head, holding aloft the Six Nations trophy with only his left hand as Wales celebrated a third Grand Slam in eight years.

Initial scans on his shoulder proved inconclusive, prompting Warburton to visit a specialist in London.

Those further test have not identified any major damage but Warburton has revealed he will visit the specialist again in two weeks to reassess the injury.

But the Blues medical experts have now set a time scale for his return after assessing the medical report.

The Blues have four Pro12 League games left after Saturday's home defeat to the Scarlets, with their trip to Parc y Scarlets bringing their regular season to an end on 5 May.

A further two games are possible if they force their way into the end-of-season play-offs.

Warburton, who struggled with a knee injury throughout the Six Nations, has played only eight games for the Blues this season.

He feels he "owes" them having been away from the region for so long.

"I'm sure they are going to be quiet conservative to make sure it [the shoulder] doesn't go again and not push me to come back too soon," he added.

"But it would nice to join up with the Blues sooner rather than later. I owe the Blues a bit to be honest because I've been away for the Six Nations campaign and now I'm going to miss a few more matches."

Warburton started Wales' opener against Ireland but had to come off at half-time, as he did in the decider against France. He won the man-of-the-match award in the victory over England at Twickenham, but missed the clashes against Scotland and Italy, with Aaron Shingler and Justin Tipuric deputising.

"To be honest my body's been creaking ever since the World Cup," he said after Saturday's French victory.

"I've carried something into every game - my knees, my shoulders - you know, everywhere really."

Ryan Jones came into a reshuffled Welsh back-row following Warburton's half-time departure to become one of only six post-war Welshmen to celebrate a third Grand Slam.

The skipper revealed that he had asked both Gethin Jenkins and Ryan Jones, who captained Wales in his absence against Italy and Scotland respectively, to pick up the trophy.

"I felt a little awkward about going up to receive the Six Nations championship trophy," he said.

"I mentioned this to coach Warren Gatland and asked if he might like to come up with me and lift it together.

"He said no immediately. 'It's a player's thing,' he said, 'But if you do feel that awkward why don't you ask Gethin [Jenkins] and Ryan [Jones] about it?'

"Gethin and Ryan had, of course, also been captains during the tournament. I asked them. 'No, it's your moment, you do it,' they both replied. Fair play to them.

"It was a superb gesture on both their parts. It certainly made me feel better. And they both still came up to the podium last and stood either side of me."