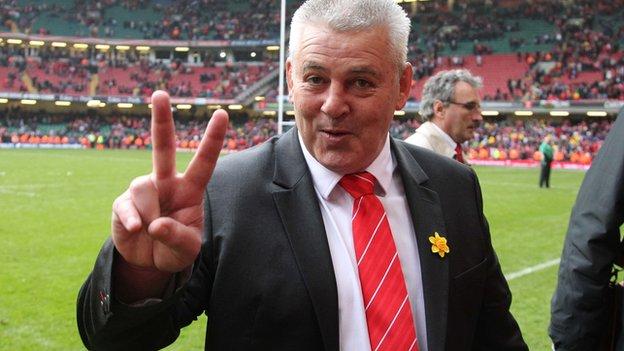 Gatland saw his team win a second clean sweep during his reign in a compelling clash against France in Cardiff.

Wales have not beaten World Champions New Zealand since 1953, have beaten South Africa only once and lost six of the last seven games against Australia.

"Our big aim is to be consistent in beating the southern hemisphere sides," said New Zealander Gatland.

"And we have a young enough side that over the next few years hopefully we can do that.

"We have been down in games during this tournament and we have learnt how to win ugly and in the past that may not have happened.

"We have accepted the tag of favourites, which has not always sat well on our shoulders.

"For a young side they have coped incredibly well and I think it can be good for us as a team over the next two or three years."

Wales' first chance of toppling one of the southern hemisphere's big sides comes when they take on Australia in a three-Test tour in June.

Gatland said he hoped Wales continued to display the virtues of "honesty, and hard work" that underpinned their World Cup semi-final finish and the Six Nations success that has followed.

"These guys have been a real credit to themselves, Wales and Welsh rugby in how they have prepared themselves," he said.

"They are excellent professionals and they make our job as coaches easy as they do more than what we expect and what is required.

"And when you have players doing that and looking after themselves and doing all the extras it goes a long way to making us coaches look good."

Their victory came 48 hours after the death of Welsh 1970s icon Mervyn Davies, who had led the nation to one of its 11 Grand Slams in 1976.

Skipper Sam Warburton, who went off at half-time because of a shoulder injury said Davies' death "put a downer" on the team a day before facing France.

"I was actually given his book by somebody about a week ago so I was about to read that," he said.

"I was well aware of how great he was as a player and to be on a list of Grand Slam-winning captains alongside players like him makes me feel very privileged."

France produced their best display of the tournament in Cardiff, having drawn with Ireland and lost to England in Paris.

He said: "Congratulations to Wales - they deserve it. It was a very tough game, but we know to win the Grand Slam is not easy and they did it.

"They have a young generation of players and a good staff and I think they deserve it.

"They are the winners and in sport you only remember the winner, not the ones who finish second.

"We are sad and disappointed as it was not a bad performance but we finished fourth in the Six Nations."