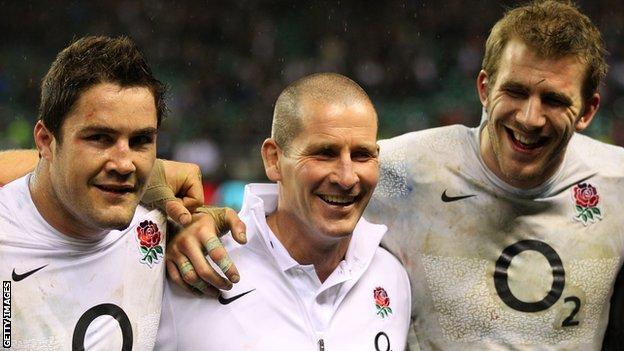 Nick Mallett, one of the main contenders to be the next England head coach, believes interim boss Stuart Lancaster will be given the job permanently.

And following the 30-9 win over Ireland, Mallett thinks the Rugby Football Union will opt for continuity.

"You can't see the RFU wanting to change a coach when you look at the team and how happy they are," he said.

But former England captain Lawrence Dallaglio expects the RFU to be considering all options before making their appointment.

"I won't sit on the fence, I think he [Lancaster] deserves to continue in the job, although I would caveat that by saying that the RFU needs to bring in more people to help him," he commented.

"I think they [the RFU] are speaking to more coaches.

"Nick Mallett and Eddie O'Sullivan are the ones who have publicly said that they want the job but it would be disappointing if only two people have applied for the job."

England prop Alex Corbisiero has joined the calls for the trio of Lancaster, Graham Rowntree and Andy Farrell to remain in charge of the team on a permanent basis.

"You can see that with Stuart Lancaster and Andy Farrell we have a good environment, we play for each other and we play for the coaches," he said.

"Whatever happens, happens, but there are a lot of positives where we are at the moment."

Fly-half Toby Flood added: "Going into 2015 - a World Cup in your own country - to have three fantastic English coaches is excellent. For Stuart to stay in that role is essential for England."