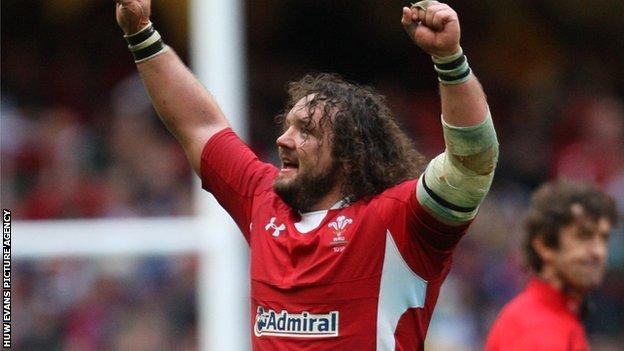 Jones will be 34 when England host the tournament and he believes Wales can only get better in the wake of their Six Nations triumph.

"I can't see me retiring just yet - I'd like to sort of make, maybe, the next World Cup," said Jones.

All three starred on the British and Irish Lions tour to South Africa in 2009 and Jones hopes to be part of the next Lions tour, to Australia in 2013.

He and Jenkins also lay claim to the rare achievement of being two of only six Welsh players since World War Two to have played in three Grand Slam campaigns.

Jenkins and Jones joined Ryan Jones in matching the feats of Gareth Edwards, JPR Williams and Gerald Davies during the 1970s.

"It's good to be in there with elite company, so until someone else joins us, we'll take it, I think," said Jones.

Wales' 201s vintage was notable for the youth of the back-row of Dan Lydiate, Toby Faletau and Sam Warburton and a back division in which centre Jamie Roberts was the oldest player at 25.

Ireland - you're not telling me we didn't deserve to win the game?

"They [the younger boys] were more relaxed than me, they were fantastic," added Jones.

"Nothing seems to faze them, which is pretty good when you're that age.

"They are all awesome rugby players… it's as if they were out on the park in a Saturday afternoon playing for the youth team.

"They're that good and that laid back. Touch wood, we'll carry on now."

Jones believes beating England at Twickenham was a key victory in a campaign that started with a narrow win over Ireland in Dublin that rested on Leigh Halfpenny's late penalty.

He said: "They [England] played very well and kind of stopped us from playing, but Ireland - you're not telling me we didn't deserve to win the game?

"We should have been out of sight and to be fair, we deserved to win it.

"But we're not too bothered about how we won the games - we won them."