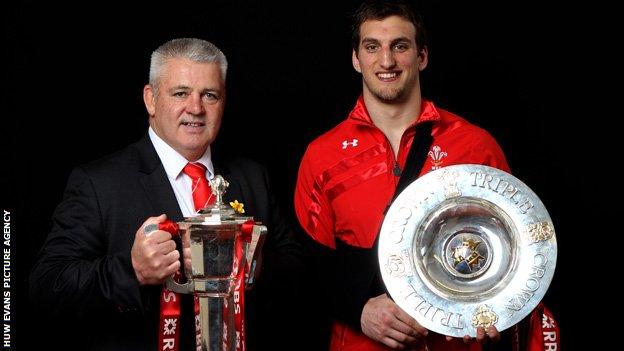 Wales captain Sam Warburton says Grand Slam-winning coach Warren Gatland should be in charge of the British and Irish Lions in Australia in 2013.

"He's a fantastic coach and, if you look at his record, I think he probably deserves to be the Lions coach," said the Wales open-side flanker.

"He's won two Grand Slams, he's taken Wales to the semi-final of a World Cup and he's got the best out of the boys he's got in the squad.

"I haven't been exposed to many coaches but, from what I've seen with Warren, I absolutely love working with him and the other coaches."

Warburton admits a personal debt of gratitude to Gatland, who elevated Warburton to the Wales captaincy after hooker Matthew Rees - a respected 2009 Lion - was ruled out by injury ahead of the World Cup.

"I owe him a lot for putting his faith in me for putting me as captain and picking me as a young number seven in the first place," said Warburton.

Gatland was an influential member of Sir Ian McGeechan's coaching team when the Lions toured South Africa in 2009.

The Lions ultimately went down 2-1 to the Springboks in a memorable Test series.