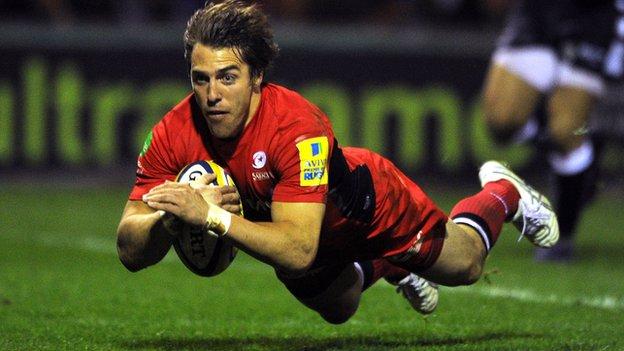 Chris Wyles scored the first of five Saracens tries as they crushed Sale 45-9 at Edgeley Park to go top of the Premiership with a five-point victory.

Ernst Joubert, Alex Goode, Michael Tagicakibau and Hugh Vyvyan all got on the scoresheet too.

England's Charlie Hodgson had a fine night with the boot on his Sale return.

This was an awakening for us. Saracens made us look really poor in some areas

In a week when the signing of Danny Cipriani was announced by ambitious Sale, the hosts were well and truly outclassed by a clinical visiting team, who severely dented the Sharks' top-six aspirations with their biggest win of the domestic season.

Saracens move to the top of the Premiership table ahead of Harlequins' home game on Saturday against play-off chasing Bath. But, on a night when Hodgson masterminded their victory, the Vicarage Road side now look odds on to claim a home semi-final berth in the play-offs.

Hodgson powered a flat pass to set up Wyles' opening try on 15 minutes.

Visiting scrum-half Neil de Kock then fed Joubert, who touched down in the corner for an unconverted score 11 minutes later.

There was still only seven points in it at the break, but de Kock broke the gain-line and fed Goode for a simple score before good handling set up winger Tagicakibau for his side's bonus-point try, Vyvyan's late touchdown merely rubbing Sharks noses in it.

The only downside for Saracens was an injury to flanker Andy Saull, who was stretchered with a serious looking knee injury.

"Defensively we were a shambles. Admittedly, they're a good side and they were very patient, and just worked on our errors. Fair play to them, but we've got to look at ourselves really.

"We had nine-and-a-half-thousand people working hard behind the scenes to get rugby popular in the North West and we could do without that to be perfectly honest. The crowds have come over the last three or four home games and nobody likes people leaving early, so there will be changes afoot all over the show.

"We're shedding 24/25 points a game and quite a lot of games we've been scoring that or thereabouts, but this really was an awakening for us. Saracens are a good side, we know that, they are champions and it looks like they're going in the right direction again. But they did actually make us look really poor in some areas."

"Charlie Hodgson had a wonderful game. He's come back from the Six Nations really confident and enjoying his rugby. Unfortunately, he didn't play the last couple of games, but he was great tonight.

"Tonight was a good start, but we can't get too far ahead. We navigated through the Six Nations, with a lot of players away and a lot of injuries, pretty well. And again this was a real squad effort at a really difficult place to visit.

"Andy Saul's injury is potentially a medial ligament in his knee. We don't know yet. We will get a scan over the next two days but we're hopeful it's nothing too serious."