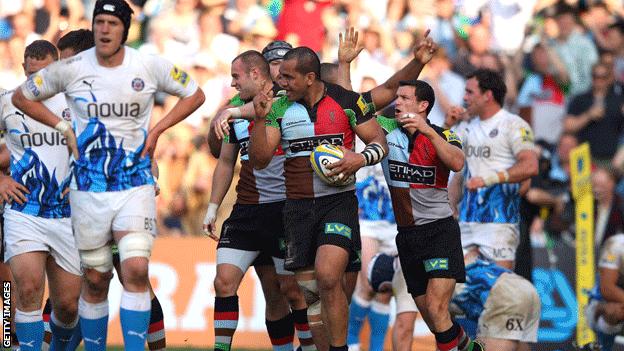 Harlequins regained top spot in the Premiership by grinding out a win over Bath in a dull contest amid balmy conditions at The Stoop.

Bath's Tom Heathcote kicked two out of two before the break, while Nick Evans only managed one from three, to give the visitors a slender half-time lead.

Evans kicked Quins level and then put them in front just after the hour.

Maurie Fa'asavalu crashed over before Jack Cuthbert missed two kicks for a losing bonus point at the death.

Given the conditions and style of both teams the feast of expansive rugby expected did not develop as defences dominated.

Brown almost went over in the right corner shortly after, but was sent into touch, after Barkley's missed tackle allowed Quins to put the ball through their hands.

Referee Wayne Barnes was stringent about rolling away from the tackle and his insistence allowed Heathcote to build a slender half-time lead, although Evans missed two shots at goal that would have put the hosts ahead.

After the break the pace picked up and only superb defensive work by Ugo Monye denied Olly Woodburn after Matt Carraro's line break put Bath on the front foot.

Tom Guest was a fingertip away from pulling off a sensational interception but James Johnston's inability to roll away handed the Bath number 10 his third shot at goal.

Heathcote sent his kick wide and soon after Abendanon scooted into space and nudged the ball through with the outside of his boot to Woodburn, who dropped the ball a yard short of the line under pressure from Luke Wallace.

Evans kicked Quins level on the hour, after earlier spurning the chance to square the score, and put them ahead for the first time five minutes later.

Bath lost Jack Cuthbert to the sin bin for tackling Brown in the air and it told when Fa'asavalu crashed over with ease, although the conversion came back off the upright.

The try scorer then saw yellow for not using his arm in the tackle but, with Heathcote taken out in the incident, Cuthbert's shot rattled back off the posts.

He had a chance to redeem himself at the death but his second effort was far from convincing.

"I haven't seen it [Fa'asavalu's yellow-card tackle on Tom Heathcote] in slow motion but he comes in to make a dominant hit, he does try to get his arms out and around but Tom Heathcote is falling.

"The referee saw what happened and deemed it a yellow card.

"People who know Mo, both from St Helens days and from here, know he's not a loose cannon going round the pitch. He's an incredibly physical bloke but he's not a dangerous player."

"I think we could have won it on another day. A try then would probably have seen us away."

"A couple of decisions were against us. His [Mike Brown's] feet were on the ground butthe referee's got to make an instant decision.

"The critical ones like that cost us, Quins scored the points when Jack [Cuthbert] went off so it wasn't the best timing in trying to keep the momentum in our game.

"Quins are a good side - that's why they are top of the league - but I thought we looked a good side today."