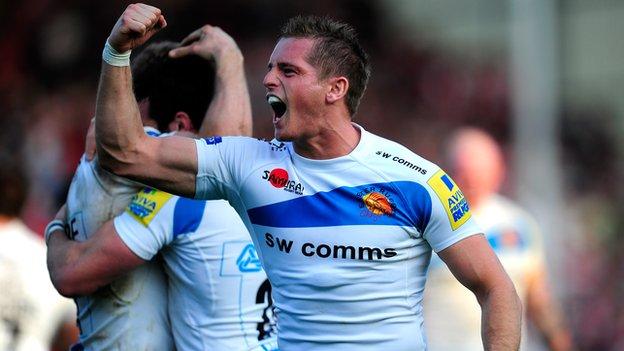 A converted last-minute Aly Muldowney try gave Exeter their first ever win over Gloucester at Kingsholm to keep up their top-four Premiership challenge.

Exeter dominated the first half with Craig Mitchell and Matt Jess tries, and five points from Ignacio Mieres.

Gloucester stand-off Freddie Burns scored 17 points in a second-half fightback as the hosts ran in three tries in 10 minutes to lead.

The result gives the Chiefs their fifth win on the road in the Premiership and their seventh win from their last eight away games in all competitions.

After Burns had kicked the hosts into an early lead the Devon men hit back when Mitchell took Chris Whitehead's offload to smash over under the posts.

Mieres converted to make it 7-3 before Cherry and Whites lock Jim Hamilton saw yellow, for what may have been a red card, when he appeared to punch scrum-half Hadyn Thomas.

The 14 men fell further behind when crisp passing saw Jess cross out wide.

Although Mieres missed from the touchline he made amends with a penalty just before the whistle after James Hanks had a try ruled out by television match official Tony Spreadbury.

Hamilton returned after the break as Burns and Mieres cancelled each other out from the tee before Gloucester took the game by the scruff of the neck.

James Simpson-Daniel profited from a well-worked overlap, with Burns converting, before the young Gloucester fly-half crossed under the sticks for a sublime solo try.

Nick Runciman's five-pointer looked to have put the game to bed but Steenson stood up to land a penalty and secure Exeter a losing bonus point.

But he went one better with the winning conversion, after Spreadbury decided Muldowney had grounded legally, to crown a battle royale.

"It feels pretty good after that rollercoaster of emotion that we got within the game.

"I thought we were outstanding in the first half, we went after the game, we attacked Gloucester in pretty much every area.

"We dropped off and that allowed Gloucester to play very well, score some good tries and bring themselves back into the game.

"I think when people watch it back, they will know we deserved to get something from that game."

"The first half wasn't good enough. Yellow card time is crucial in any game, especially against a top side.

"To lose the game in the last seven minutes is old news too. We've had that six or seven times this season and we're doing some dull things which isn't enabling us to kick on.

"We had no ball and no territory. We looked flat, and we have to accept that. I'm bitterly disappointed.

"We need to understand that we need to be better to complete, and we're not giving ourselves the best opportunity. Exeter came here and we should be humble enough to accept we didn't match them.

"We have to get our chins up. We have four games left and we've got to fight for the top six now. We've got four teams below us to play. It's not the time to feel sorry for yourself."