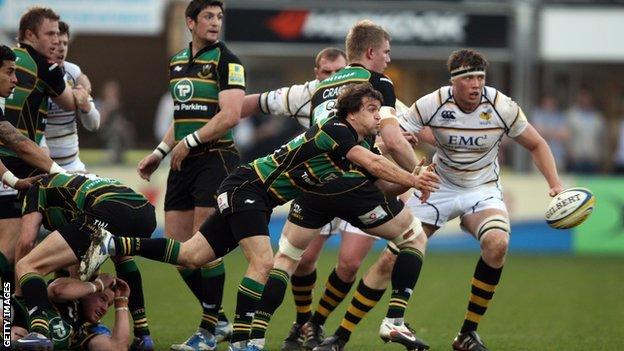 Northampton maintained their Premiership play-off challenge with a convincing bonus-point win over Wasps.

Nick Robinson gave the visitors a strong start from the tee but two first-half tries by Ben Foden and one from James Downey gave Saints control.

Robinson and Ryan Lamb exchanged penalties after the break but, despite huge amounts of possession, the hosts struggled for a fourth try.

It came when Martin Roberts darted over and Stephen Myler converted.

Wasps' pack started well, while Saints were short of hooker Dylan Hartley, forcing Soane Tonga'uiha to concede a penalty at the scrum which Robinson landed.

Crucially Wasps lost Dom Waldouck to a hamstring injury and while he was down George Pisi capitalised with a perfectly weighted grubber that popped up into Foden's arms for the try.

Lamb added the conversion but Robinson quickly reduced the arrears to one point with a second penalty before making it 9-7 to the visitors after Saints' pack had again folded at scrumtime.

Downey glided through as Wasps' already porous defence malfunctioned and although Lamb's conversion was charged down, the fly-half was on song with 32 minutes gone to make it 15-9.

Saints then produced a memorable try when they switched play wide from left to right and Chris Ashton cut inside to Lee Dickson, who fed Foden on the wing.

Lamb - who missed two of his first three kicks - converted impressively from the touchline.

Robinson made it a 10-point game after the break but Saints tightened up their scrummaging and when Ben Broster and Andy Long came to blows as they packed down both saw yellow.

Lamb missed the resultant penalty but made it 25-12 minutes later from the tee.

Saints searched for the bonus point but despite 90% possession and three gilt-edged chances they could not break through.

Wasps lost Robinson to the sinbin for kicking the ball away when Saints were awarded a penalty and, with the stand-off gone, Roberts dashed over from the base with Myler adding the extras.