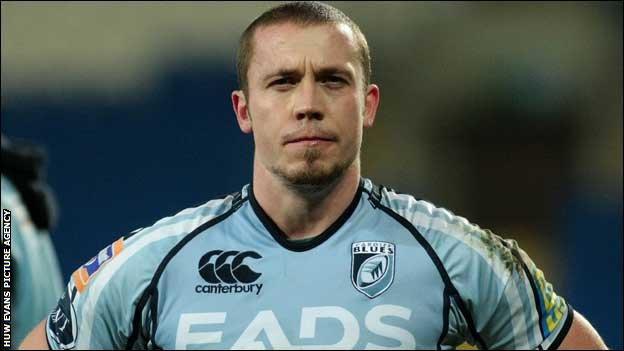 Cardiff Blues' Welsh international scrum-half Richie Rees has announced he is leaving at the end of the season, but has not revealed his new club.

Rees told his Twitter followers: "I've decided to leave the Blues next season.

"Thanks to all who have supported me in my time here, but an exciting new challenge lies ahead."

Later, in in a Blues press release, Rees said: "I've had a fantastic time at the Blues since joining in 2007 and there have been many highlights.

"In particular winning both the EDF Energy & Amlin Challenge Cups, and the unforgettable Heineken Cup semi-final penalty shootout versus Leicester.

"Cardiff Blues are currently in a transition period and I believe now is the right time to throw myself into a new challenge.

"There's a great group of boys at the Blues and I really enjoy training with them every day.

"I'd like to thank all of the supporters who have been great with me since joining, and Dai Young for his contribution to my career.

"I look forward to ending the season well with the Blues.

"I'm currently considering various options for next season and will confirm my destination in the forthcoming weeks."

The Swansea-born former Wales Under-21 player moved from Ospreys to London Irish ahead of the 2006-07 season and a year later signed up for the Blues.

He overtook Sale's British and Irish Lion Dwayne Peel in Wales' reckoning, making his Wales debut against England in the 2010 Six Nations.

Lions flanker Williams, 36 and the holder of 99 Wales caps, is expected to retire.