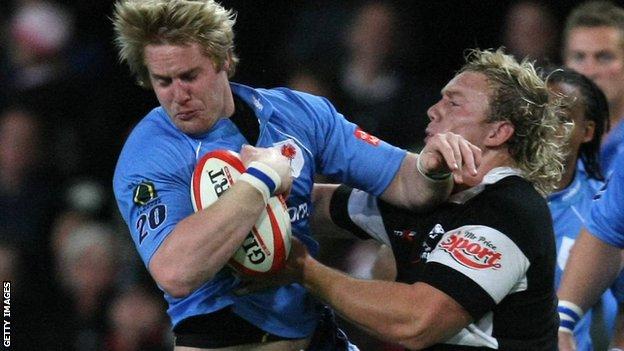 The 24-year-old, who is over 6ft 3ins tall and weighs almost 17st, is a former South Africa schools captain and currently plays for the Bulls.

"I'll be coming to a club that's very professional and with people who work hard and want to win trophies," he told the Saints website.

"It's somewhere which can be compared to the best clubs in world rugby."

The announcement of the deal came just two days after Northampton lost 26-14 to Leicester in the LV= Cup final.

And director of rugby Jim Mallinder expects van Velze to be a major influence in their quest for trophies next season.

"He will bring plenty of qualities to our squad - he carries the ball well, has lots of pace and shows good game understanding and leadership.

"We will need all of those things as we look to stay at the top end of the Premiership and get to the knockout stages of European competition, and believe that Gerrit-Jan can play a big role in our development as a squad," Mallinder said.

Van Velze is the second forward to join Saints this month following the recruitment of Rotherham Titans captain Sam Dickinson.