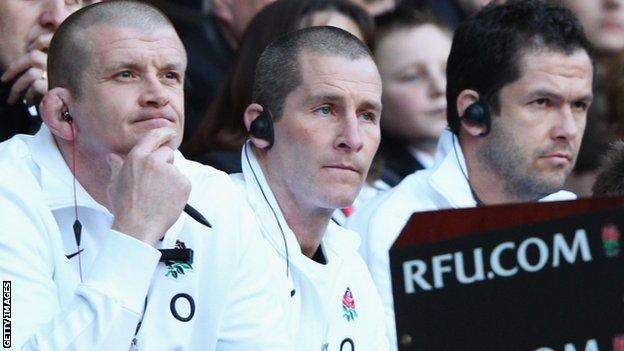 Stuart Lancaster's stint as interim coach for the Six Nations has dragged England "out of the gutter", according to forwards coach Graham Rowntree.

Lancaster guided England to second in the championship, turning things round after a poor autumn World Cup campaign.

"Stuart has dragged us out of the gutter," said Rowntree. "I don't want anything to change. You can't argue with what he's done."

Lancaster will be interviewed for the post on a permanent basis this week.

Former South Africa and Italy coach Nick Mallett is also due to meet the Rugby Football Union, despite having admitted that he expects the job to go to Lancaster.

Having previously stated that he hoped to have a permanent coach in place by 17 March, RFU chief Ian Ritchie is now not expected to make a decision until next week.

A Six Nations campaign that included impressive victories over France and Ireland has prompted several former and current England players to call for Lancaster to be made coach on a permanent basis, despite his relative lack of international experience.

Rowntree believes that the team environment that Lancaster has created is the best he has experienced in a career as player and coach at Leicester, and with the British & Irish Lions.

"On Saturday night after the official dinner we went back to the hotel and had a cracking night," added Rowntree. "But it was tinged with sadness because we felt emotionally the journey was coming to an end.

"I have never felt that before. I have always been ready for home.

"My over-riding feeling is of pride - but there's a load more to come from this group of players and I'm dying to work with them again."

Reports have claimed that Rowntree, the only member of the England coaching staff to emerge with his reputation enhanced by leaked reports into the dismal World Cup campaign, would keep his job if Mallett was appointed.

But the future of Andy Farrell, who completed Lancaster's support staff for the Six Nations, seems to be back in club rugby, as Premiership champions Saracens are

"I understand Andy's position with regards to Saracens," added Rowntree. "And I admire his loyalty."