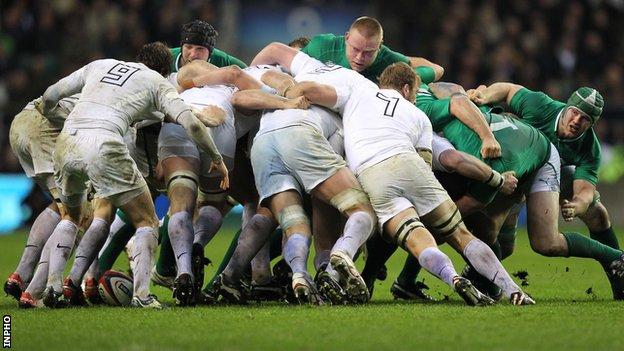 The Irish Rugby Football Union has advertised for a high performance scrum coach just days after Ireland's front row was demolished by England.

Nine penalties were conceded during the set-piece in Saturday's 30-9 rout at Twickenham that exposed Ireland's lack of depth at tighthead prop.

The IRFU took the decision to create the new post three months ago.

The coach will work with youth teams across the provinces and will have no involvement with the senior team.

On Saturday, Leinster tighthead prop Mike Ross left the field with a neck injury sustained in the opening scrum and his replacement Tom Court, more accomplished at loosehead, was under severe pressure for the remainder of the game.

"Tom Court came on and went valiantly, but our balance was off," coach Declan Kidney said after the match.

"That was always on the cards because we have guys who don't have huge tighthead experience playing for Ireland at the moment.

"It's something we'll have to work on and bring more Irish guys through."

The problem facing Ireland is exacerbated by the fact that at Ulster and Munster, overseas players John Afoa and BJ Botha are the first choice tightheads.

Since winning the first of his 20 caps in 2009, Ross has stiffened a backpedalling scrum into a unit capable of holding its own, even against top opposition.

But his injury at Twickenham - probably the greatest contributing factor to the outcome - highlighted a problem that Kidney is all too aware of.