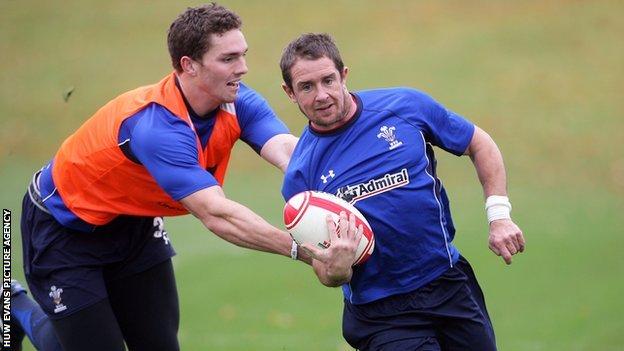 It was the first Six Nations since Williams retired from international duties in December.

Welsh talent is now increasingly being tempted to play outside of Wales, particularly in France. In fairness this is understandable as individuals look to get the best rewards in careers that can be shortened unexpectedly with injury and so on. However could this/will this ultimately threaten the growing success the national team has had in recent times? Rob Thomas

Of course, having your players in a different country is going to hinder the Welsh team. Warren Gatland and his coaches won't have the access to players he'd like and they wouldn't be rested in between Tests, as they are if they stay in Wales, because they go back to clubs in France and England in between.

Mike Phillips and other guys have had to play in between Six Nations games. It's not easy, but it's going to be very difficult at the moment, especially with the way in which they're bringing in a salary cap into the game in Wales, to keep players in Wales.

After the tournament are there any areas within the squad that Wales can look to improve on? Are any key positions light of world class back up and with an eye on the next World Cup is there time to bring someone on? Mark Treharne

Wales are pretty well-blessed at the moment with the players they've got, certainly in the back-row they've never had such strength in depth with the likes of Justin Tipuric and Ryan Jones, who has come on and played extremely well in the tournament.

The only concern you would have is having an out-and-out tight-head. Paul James can play both sides of the scrum, but is predominantly a loose-head and we don't have many tight-heads coming through.

It's probably the same in any country in the world. You've got James Hook who can come off the bench to play in any number of positions in the backs.

Scott Williams can play wing or centre - the concern for me would be at tight-head if Adam Jones goes down injured.

I know Paul James can do a great job, but who do we have as cover then? That's our main concern looking at the future.

I feel that Wales have the power to break gain lines and make good ground but they haven't been particularly effective with their support runners. What areas do you think there are that need improving? Craig Brown

Support running is a knack and there's a skill in it, knowing how to run lines, being instinctive about when players are going to make breaks.

But because defences are so good these days, line breaks are few and far between. Rob Howley certainly encourages players to run the right lines, instinctively thinking players are going to break.

We have an abundance of power behind the scrum with players such as George North and Jamie Roberts capable of running over players.

But summer tours give coaches the chance to bring in other players and I've been impressed with [Cardiff Blue] Harry Robinson, 18. I've only seen him a couple of times and he wants to take players on.

He's very nippy, gutsy and bold. You hope players such as that continue to come through the ranks.

I'm sure I won't have to tackle them both [George North and Alex Cuthbert] at the same time - I wouldn't be able to do that!

Who is the best-placed team to win the next Rugby World Cup and why is Wales it? Martyn Garrett Roberts

Wales will have more of a chance in four years' time. They're starting to slowly develop into this fantastic squad. It's going to be tough. New Zealand are always the team to beat - the Tri-Nations sides will be.

If we keep progressing and moving forward, I think we'll have a really good chance in 2015, I really do.

Shane is my son Luke's rugby playing hero, he would really like to know who was Shane's when he was a kid? X Kelly Davies ‏

I was a big fan of Ieuan Evans - that was more my era - but my hero - and the guy I used to look up to because I had all his videos, but not that I was around that long in the 1970s, was Gerald Davies.

I used to model myself on Gerald - his sidestep - and Phil Bennett's sidestep. I'd go down the park and pretend to be both of them. And even though I'd practise and practise Phil Bennett's sidestep, and how he'd take players to the side, then change angle last minute, Gerald was always my hero and I've been privileged enough to have met him over the years and I can now call him a friend. So it's pretty surreal.

With the Welsh squad being full of youngsters who do you think has the brightest career ahead of them? Stacey Roberts

That's a really difficult one because collectively this squad has a massively bright future. I just hope they stay away from injuries and have bright, illustrious careers.

I wouldn't like to pick a player out - it wouldn't be fair, but North and Halfpenny have been playing really well and Cuthbert has come on leaps and bounds.

If they can avoid injuries and score lots of tries for Wales and probably beat my try-scoring record.

I think it's fair to say Wales didn't kick on after the 05/08 slams. Do you think this side is different? And if so, why? Joel Haley ‏

I think this side will be a little bit more mature in the way they progress after this Six Nations. They're a very confident bunch, there's no arrogance there whatsoever; they're just confident in their ability, confident in each other and they play for each other.

And that's not to say we haven't in the past. Because they're young, they have a "no-fear" attitude. It was refreshing to be part of in the World Cup - I hadn't experienced it before - they believe they can win every time they play.

They can go on to be very successful in Australia in the summer.

Going to the southern hemisphere is the toughest rugby you'll ever play, but I think they'll do well and it will be interesting to see how they deal with losing games because inevitably it's going to happen.

But I think they'll be able to cope with that and be mature enough to move on.

You must be dreading playing against Wales for the Baa-Baas now [on Saturday, June 4 at the Millennium Stadium]! How are you going to stop North and Cuthbert? Darren

I'm sure I won't have to tackle them both at the same time - I wouldn't be able to do that! I'll try my best just to stop one of them.

I never thought that I'd ever play against Wales so that's going to be tougher for me. I'm sure I'll be able to cope with how physical these guys are.

I've played against George a number of times and he's far stronger than I am so that's going to be difficult.

But I play for the challenge and I've never shirked a game or player and it will be great to play my last game at the Millennium Stadium.