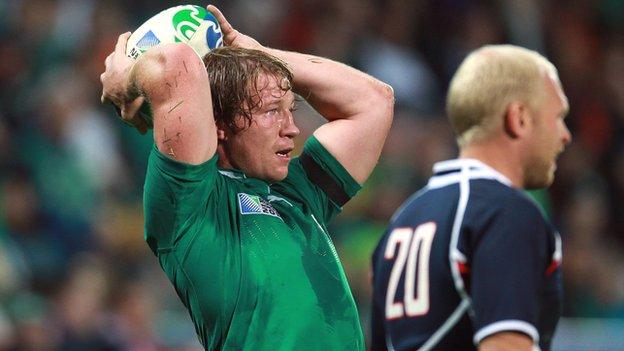 Ireland and Munster hooker Jerry Flannery has retired from professional rugby because of a back problem.

The 33-year-old has struggled with injury in the last two seasons, first with his calf and then with the back injury which forced him to quit.

Flannery won 41 caps for Ireland since 2003 while playing for Munster, after joining from Connacht.

"Since my injury in the World Cup, I've struggled to regain the fitness needed to play at this level," he said.

He sustained the calf injury in the tournament and recovered, only for the subsequent back problem to end his career despite exhaustive medical treatment.

"I'm very sad to have to announce my immediate retirement from rugby due to injury," added Flannery.

"I feel incredibly privileged to have played with so many great players with Munster and with Ireland.

"To train hard and win trophies for Munster and Ireland alongside some of my best friends has been an amazing experience."

Later that year he was selected for the Lions tour to South Africa, only to be forced to withdraw when he fractured his elbow at the training camp in England.