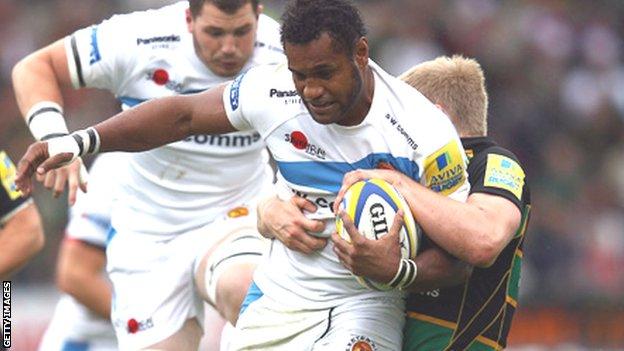 Exeter Chiefs centre Sireli Naqelevuki says he is pleased to be playing after recovering from a badly broken arm.

The 31-year-old Fiji international suffered the injury during Exeter's 24-19 loss to Gloucester in November.

Naqelevuki needed a metal plate inserted in his right arm and has missed much of the season.

"I'm really happy to get back to training, I've been looking forward to getting back into the squad," he told BBC South West.

"I didn't think that I would be out for this long, but I've recovered well and the injury's healed up well so I'm looking to finish the season," he added.

Naqelevuki, who scored two tries in his seven appearances this season, is likely to figure in Saturday's Premiership clash with Gloucester at Kingsholme.

But Chiefs head coach Rob Baxter says it is unlikely that he will start after his side crushed Sale 37-12 in their last outing.

"Those who have been playing have done a fantastic job and we've got a lot of Premiership points with Sireli not being there.

"I'm a big one for consistency of selection and keeping things going if players are playing well.

"He's going to have to go well and perform to a high standard to force his way back in."