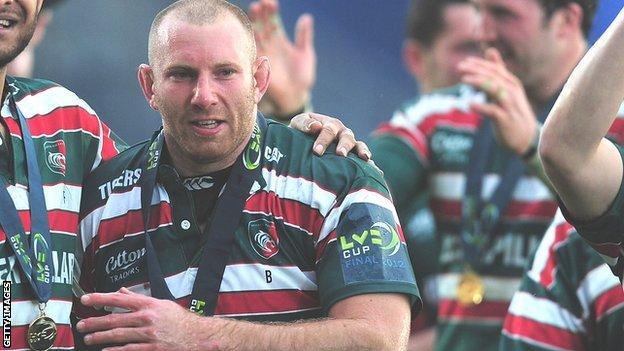 Northampton flanker Calum Clark has been cited by the Rugby Football Union after Leicester's Rob Hawkins suffered a broken elbow in the LV= Cup final.

Clark is accused of an act contrary to good sportsmanship for hyperextending the hooker's arm during Sunday's game.

He will face an RFU disciplinary panel, chaired by His Honour Judge Jeff Blackett, on Monday.

Hawkins emerged from a 21st-minute ruck in agony and is expected to be out of action for around 12 weeks.

Leicester's director of rugby Richard Cockerill had earlier castigated the Saints back-row forward for the act that he described as "completely out of order".

"It'll be looked at by the authorities and if Rob's fractured his elbow he'll be out for eight to 12 weeks," Cockerill told BBC Radio Leicester.

"If Calum Clark is deemed to have done it on purpose it's pretty horrendous."

No card was issued for the incident during Sunday's final at Worcester, which Leicester won 26-14.

Hawkins, who is out of contract at Welford Road this season, will be sidelined for the next three months.

Cockerill was left incensed by the episode and attempted to publicly draw the RFU's attention to it.

"Something's gone on there but we'll let them look at it and sort it out," added Cockerill.

"It's a pretty poor act. I think it's really out of order and in my opinion it's as bad an injury as I've seen on a rugby field."

A spokesman for Saints told BBC Radio Northampton: "Richard Cockerill is entitled to his own opinions."

Meetings between the two east Midlands rivals have proved tetchy affairs in the past 12 months.

In December, Tigers' Alesana Tuilagi and Saints' Tom Wood were both sent off after a mass brawl in the Premiership clash at Welford Road.