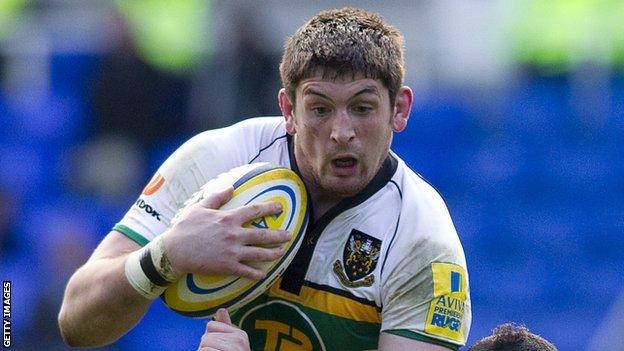 Northampton Saints centre James Downey says winning the Premiership is how he aims to end his career with the club.

The 30-year-old is re-joining Munster at the end of the season, having been at Franklin's Gardens since 2007.

Downey told BBC Northampton: "I think it does mean more to me because I am leaving. I'm desperate to win something with the club [this season].

"But I've loved every single minute over here and the future's only going to be bright for the club."

The Irishman joined Saints ahead of their National League One campaign, with director of rugby Jim Mallinder also arriving at the club.

Downey will join Roger Wilson, Chris Ashton and Greig Tonks in leaving the Premiership side at the end of the season.

"I'm coming to the end of my time here and I really want to win it," added Downey. "Some of the other lads are in the same boat."

Meanwhile, Saints have been boosted by the return of their England internationals from Six Nations duty.

Downey continued: "A couple of years ago, they've come back and some heads have been down [after time away with England].

"But they're coming back full of confidence and we're pretty confident as well with the way we've been going.

"It's a big lift coming back in the squad and it's good to have them back."