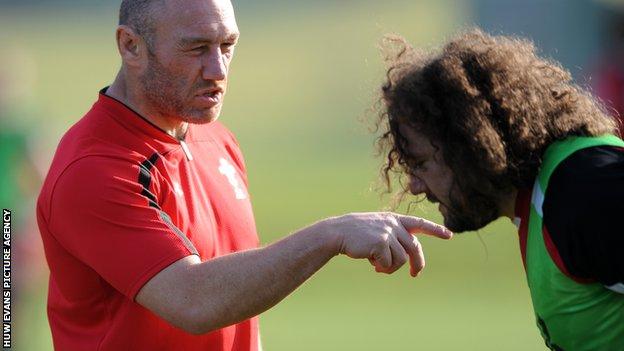 Wales forwards coach Robin McBryde has signed a contract extension with the Welsh Rugby Union until the end of the 2015 World Cup.

The new deal brings McBryde in line with the rest of Wales' Grand Slam-winning team on long-term deals.

"I am delighted to be staying in Wales to continue to build on the important achievements of the past few years," said the 41-year-old.

"It is a great coaching environment in which to operate."

McBryde, 41, has been involved with Wales since 2006, working under Gareth Jenkins before being retain by current coach Warren Gatland.

He was Wales caretaker coach in 2009 when Gatland joined the Lions.

A similar scenario is possible in 2013 if Gatland, an assistant coach on the South Africa tour, leads the Lions to Australia.

The WRU has granted Gatland permission to miss the 2013 Six Nations should the Lions come calling, leaving McBryde and attack coach Rob Howley to be "focused" on the Six Nations.

"I'm pleased to say we've concluded matters with Robin over the course of the past few weeks and Robin will be with us right the way through to the World Cup in 2015," said WRU chief executive Roger Lewis.

"I took advice from the coach - it's what Warren wants and who does he want around him. He wanted Robin with him until 2015 so I went and got that and sorted it out."

Gatland and defence coach Shaun Edwards are under contract until the end of the next World Cup, while Howley has a deal until mid-2016.

Kicking coach Neil Jenkins has also recently singed a new long-term contract to become a member of staff at the WRU.

As a player, McBryde was part of the 2005 Grand Slam squad and won 37 caps before embarking on a coaching career with the Scarlets.

He has helped Wales develop one of the most formidable forward packs in world rugby, with flanker Dan Lydiate emerging as the latest star after being named the outstanding player of the 2012 Six Nations.

"I am a very proud Welshman so it is particularly important to me that I can now help build our squad towards their involvement in the next Rugby World Cup," he added.