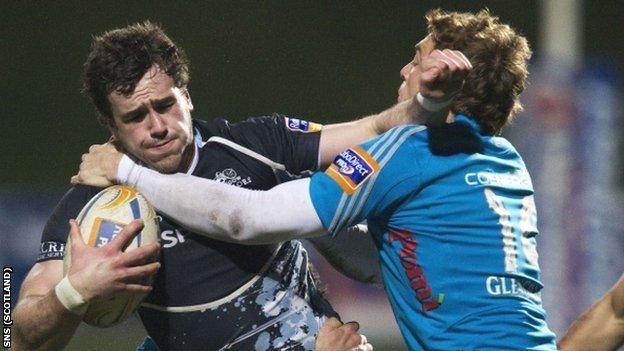 Glasgow Warriors ran in three tries at Firhill as they proved too strong for Aironi in the RaboDirect Pro12.

Tommy Seymour crossed the line for the hosts in the first half and Duncan Weir's penalties helped ease Sean Lineen's side to a 16-6 half-time lead.

Further tries by Chris Fusaro and Peter Murchie, on the left wing, put the result beyond doubt but a fourth try and bonus point proved elusive.

Warriors remain in fourth place, the target to make the play-offs.

Glasgow have now lost only one of their last 14 Pro12 fixtures and have beaten the Italians in all four meetings since Aironi joined the Magners League at the start of last season.

Lineen was given a warm reception by the crowd, the fans keen to register their appreciation of his efforts at the club he will leave in the summer to take up a new scouting role at Murrayfield.

Glasgow, captained by hooker Dougie Hall for the first time, looked sharp from the start of the match and were ahead after three minutes when Weir kicked home a penalty.

Seymour and Murchie went close to scoring a try out on the right as the Warriors enjoyed a period of sustained pressure.

And it was from that move, when play switched quickly to the left, that Glasgow were awarded another penalty for an infringement and Weir made it 6-0.

Midway through the first half, Weir slotted home his third penalty before Luciano Orquera reduced the deficit with a penalty from a central position moments later.

And, despite their superiority, Glasgow found themselves just three points ahead when Orquera added his second penalty.

But a quick surge across the try line by Seymour better reflected the balance of the match as half-time approached. Weir added the extras.

The hosts were given a fright just before the interval when Weir's clearance was charged down by Orquera.

The run of the ball went against the Italians, though, and some lively defending prevented the concession of a try in the corner.

Aironi went in at the side of the scrum once play had restarted and Weir's boot extended the lead to 19-6.

Moray Low came on for Mike Cusack to make his first appearance since January after being out through injury.

Glasgow's second try came from a drive on Tom Ryder's line-out take. Fusaro and Ryan Grant were in the midst of a mass of dark blue jerseys landing on the ball and it was the former who was credited with the score.

With the backing of the fans, Glasgow pushed forward once more and when David Lemi's pace and dummy set up his team-mate Murchie on the left wing he had the simple task of running over the line for the third try of the match.

Time got the better of Glasgow, though, as they sought what could be a vital bonus point.

In the final move of the match Aironi managed to push Glasgow off the field of play a metre from the try-line.