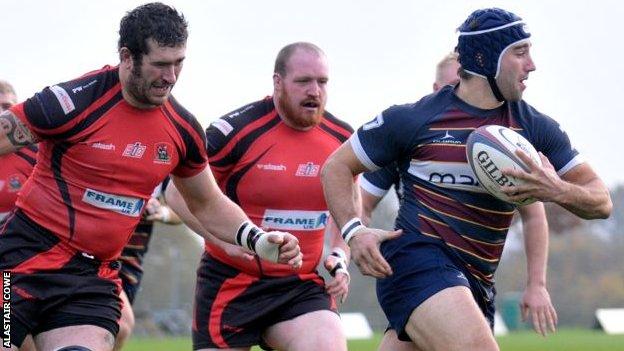 Redruth threw away an early 15-0 lead as they lost 40-27 to new National Two South leaders Old Albanians at the Rec.

Tries from Tom Duncan and Tom Notman along with a Brett Rule penalty put the Reds ahead after 14 minutes but Old Albanians hit back with three tries before half-time.

The Reds took a 22-21 lead just after the break as Damien Cook went over.

But Old Albanians scored three more tries to go 40-22 up before Craig Bonds went over late on for Redruth.

"We went real hard for the first 25 minutes and went 15-0 up and controlling the game, but three really soft tries left them in," Redruth fly-half Paul Thirlby told BBC Radio Cornwall.

"It was a good game to watch but a little disappointing to come away on the wrong side of.

"We fell off some soft tackles and that let them in for some scores but when we had the ball we dominated.

"We played some really good rugby, it's just disappointing to give them some soft tries, I felt we deserved more out of it."