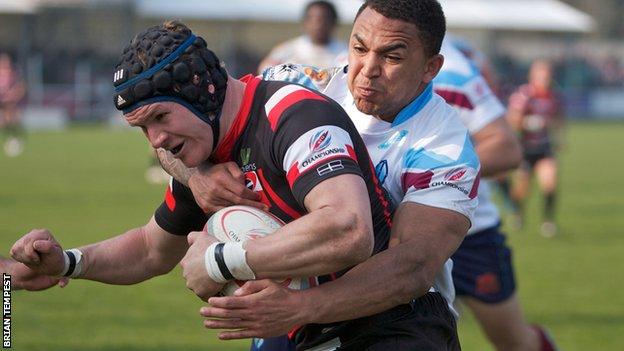 Cornish Pirates got the first win of their Championship play-off campaign as they beat Rotherham 25-17.

Law kicked two more penalties and Cook hit back with one of his own before Pointer went over again with 25 minutes left to seal the victory.

The Pirates stay second in Pool B, five points off leaders Bedford.

"It was hard game, take nothing away from Rotherham, they've come here on the back of a very good win at Leeds last week and they've gone out here to play some rugby, but they've fallen short because of a very determined Pirates outfit," Pirates winger Wes Davies told BBC Radio Cornwall.

"We knew it was going to be a forward battle but I did think our forwards had the edge and our forward set piece was dominating Rotherham.

"It took us a while to really close the game out, but all credit to the boys, we stuck at the game plan well and it paid dividends in the end."

But Davies warned that Rotherham will want revenge when the Pirates visit them at the weekend in the return fixture.

"They're going to fancy their chances because they've only lost by eight points," he added.

"There'll be bruised egos from their forward pack because I do feel we've got the better of them so they'll be firing on all cylinders next week."