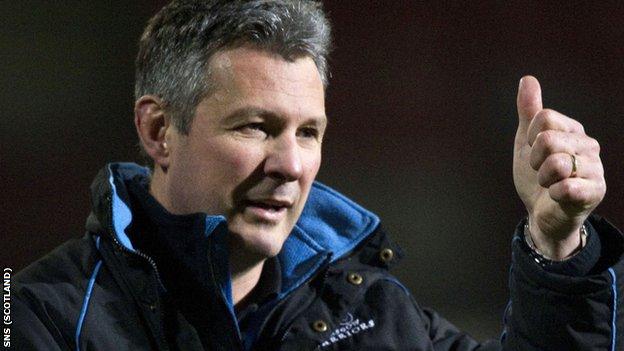 Tries from Tommy Seymour, Chris Fusaro and Peter Murchie put Glasgow in fourth place in the table with a play-off still place on target.

"Ideally, we want four out of four wins", said Lineen.

"We want to finish top two. Our goal this season was top two, not top four - so we want a home semi-final."

Glasgow have now lost only one of their last 14 Pro12 fixtures and have beaten the Italians in all four meetings since Aironi joined the Magners League at the start of last season.

Lineen admitted the Italians provided "stuffy" opposition, but Warriors were aided by the return of several players from the Six Nations.

"It was a bit nervy at times, but they're a stuffy team, Aironi, and I'm delighted for the players to get a win.

"They put in an amazing amount of effort and hard work at this time of year.

"To go unbeaten at this time after the internationals and get integrated back into the training group, it's going to be interesting selection-wise going forward."

Elsewhere in the Pro12, Ospreys ended Leinster's 20-match unbeaten run, although the Irish side remain on top with a nine-point lead and Glasgow have four remaining fixtures against Munster, Treviso, Connaught and the visit of Cardiff next week.

"It's a fantastic result - we are where we are - but we can't control certain things," said Lineen.

"I know Ospreys won, but we can't control that. There are so many connotations over the next while.

"Next week is going to be interesting too when Cardiff come up here - it'll be a real test match.

"There's not going to be wholesale changes - these guys deserve what's coming, because it's a massive amount of games still to go, so there's still a lot to play for right until the end of May.

"The guys and their attitude have been fantastic."