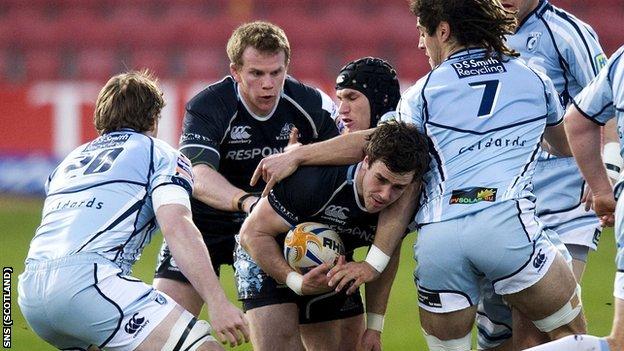 Glasgow Warriors moved up to third in the RaboDirect Pro12 with victory against Cardiff Blues at Firhill.

Ryan Wilson's converted try and a penalty by Duncan Weir gave Glasgow Warriors a 13-point advantage at the half-time interval.

Wilson went over again in the early stages of the second half and Chris Fusaro added a third try, Weir converting both.

And Colin Shaw's late try ensured the bonus point for Sean Lineen's side.

That extra point kept Glasgow ahead of Ulster, who also claimed a bonus point in their defeat of Aironi, as Ospreys slipped to fifth ahead of their home match against Treviso on Saturday.

The birth of Xavier Rush's son earlier in the day prompted a late change in Cardiff's line-up with Ma'ama Molitika moved to number eight and Macauley Cook coming in to blindside flanker.

And Glasgow were also forced into a change when Graeme Morrison was helped off the field with a knee injury, Peter Murchie being sent on from the bench.

Forward passes and handling errors prevented the Warriors converting promising breaks into tries but their pressure was rewarded when Wilson forced the ball down on the line and the TMO awarded the score. Weir added the extras.

Glasgow were impressive in the tackle and the visitors were struggling to gain any territory in the first half.

Chris Fusaro had a man over as he burst towards the try line on the right but did not offload before being tackled.

Weir was also unsuccessful with the boot in the closing stages of the first half, pushing a penalty wide before a drop-goal attempt suffered the same fate.

The Warriors' set piece had been strong in the first half and another successful line-out was the catalyst for their second try as captain Alastair Kellock tried to force his way over.

Blues halted that advance but the ball was recycled for Wilson to cross again, Weir converting from the right-hand side.

A scrum infringement led to Halfpenny kicking Cardiff's first points. The visitors were then caught offside but Weir kicked wide.

Sean Lineen made several changes to the Glasgow line-up and the hosts moved further ahead when Alex Dunbar weaved past a couple of tackles and unselfishly offloaded for Fusaro to register the score.

John Barclay, who had only been on the field a few minutes, was stretchered off injured, and the introduction of scrum-half Henry Pyrgos meant a switch to number eight for Chris Cusiter.

And it was from that position that Cusiter burst clear off another Dunbar pass and played in Shaw for the crucial fourth try. Weir's replacement Jackson converted.

Cardiff, with Gavin Henson on from the bench, pressed for a late score, but a forward pass frustrated their attempts in added time.