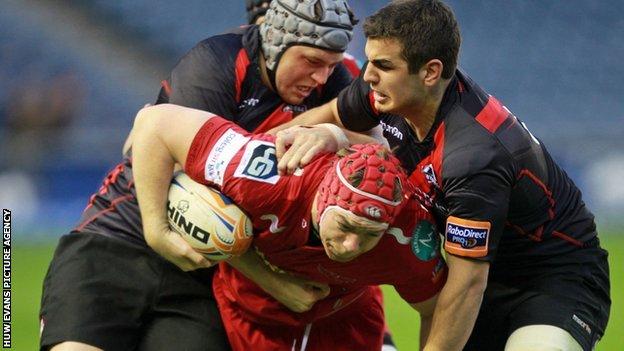 Dave Denton crossed for Edinburgh midway through the first half and a penalty try before the break helped establish a 20-6 lead for the hosts.

Scarlets ended the first half and began the second with 13 men due to Matthew Rees and Deacon Manu's sin-binning.

The hosts did not take full advantage and Andy Fenby and Jon Davies ran in tries as Scarlets drew level, but Greig Laidlaw's penalty ensured a home win.

Rhys Priestland's early penalty was cancelled out by one from Laidlaw, who then kicked Edinburgh ahead with another penalty.

Edinburgh pressed from a line-out in the Scarlets 22 and Ross Rennie, one of nine Scotland internationals returning from Six Nations duty, was tackled just short of the line.

However, he offloaded to back row colleague Denton, who plunged over near the upright. Laidlaw converted.

Referee Peter Fitzgibbon warned Scarlets after several infringements but it went unheeded as Manu offended at the breakdown and was promptly shown a yellow card.

And Scarlets captain Rees was also sent to the sin bin after being penalised for a deliberate knock-on in front of his own posts.

Edinburgh opted for a scrum from the ensuing penalty and shunted the depleted Scarlets pack backwards, forcing another offence and a penalty try, which Laidlaw converted.

Mike Blair was foiled just short of the line as Edinburgh were frustrated at the start of the second half.

And, once back to their full complement, the Welsh side began to reduce their deficit with Priestland kicking his third penalty.

Fenby then collected a flip pass on the edge of the Edinburgh 22 and raced round the sticks to touch down, Priestland adding a simple conversion.

Laidlaw steered between the sticks after Priestland conceded a penalty, but Scarlets's comeback was re-ignited with Davies' try.

Stephen Jones, who had missed a penalty after replacing Priestland, freed the outside centre to score and Jones converted to level matters.

However, Laidlaw kicked Edinburgh ahead again and the hosts survived a late Scarlets rally with a turnover, then a knock-on, halting the visitors's progress.