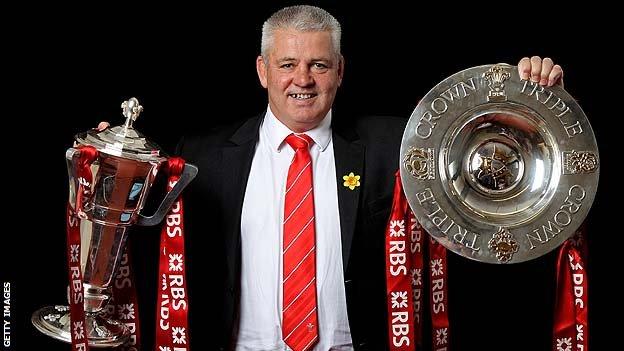 Wales coach Warren Gatland has been offered the job of leading the British and Irish Lions on their 2013 tour to Australia, BBC Wales Sport understands.

Gatland was interviewed for the head coach job in London on Wednesday before returning to his native New Zealand.

Representatives of the 48-year-old, who has just led Wales to the second Grand Slam of his time in charge, are now believed to have begun contract talks.

Gatland's appointment is expected to be finalised in the next month.

Lions bosses wanted their 2013 coach to be "available effectively a year out".

And the Welsh Rugby Union, Gatland's full-time employers, had already paved the way for his Lions appointment by granting permission for him to miss the 2013 Six Nations.

WRU chief executive Roger Lewis has already spoken "informally" to Lions team manager Andy Irvine and Lions chief executive John Feehan about the prospect of Gatland, who was assistant to Sir Ian McGeechan on the 2009 Lions tour of South Africa, coaching the Lions in Australia.

Gatland is expected to appoint his Wales defence coach Shaun Edwards to his backroom team, while England defence coach Graham Rowntree, who was linked with a move to Wales in 2011, is also widely tipped to be one of his assistants.

Wales lost their coaching team of Gatland, assistant Edwards, skills coach Rob Howley, plus other members of their backroom staff to the 2009 Lions tour to South Africa.

The Lions lost 2-1 to the world champions, while Wales were on a two-Test tour in North America.

The WRU are happy to ask Gatland's assistants Howley and Robin McBryde to lead Wales in the 2013 Six Nations and on their summer tour to Japan if Gatland was confirmed as Lions chief.

He also guided Wales to an impressive fourth place at the 2011 Rugby World Cup before securing a second Six Nations clean sweep in 2012 - Wales' third Grand Slam in eight years.

Gatland, who also won the 2004 Heineken Cup and three English Premiership titles as Wasps coach, is likely to become the second foreign coach to lead the Lions.

Fellow Kiwi Graham Henry, one of his predecessors as Wales coach, led the Lions' unsuccessful 2001 tour to Australia.

Gatland will take his Wales team on a three-Test Tour to Australia this June before an expected return Down Under with the Lions 12 months later.