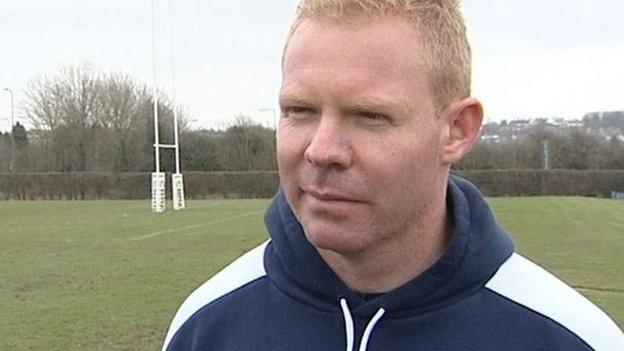 Bristol coach Liam Middleton says that his side were nervous in their 24-19 win over Nottingham because there is too much pressure on the team.

After racing into an 18-0 lead, Bristol were pegged back by two Nottingham tries, and Middleton believes pressure on the team is taking its toll.

"We didn't play well, but we won and it's difficult to win here," he told BBC Radio Bristol.

"The guys are putting too much pressure on themselves."

He continued: "We were nervy today and I just said to the players after the game we need to trust in what we're doing.

Despite taking an early lead, aided by tries from William Helu and Fautua Otto, Middleton believes that his side need to stop getting ahead of themselves.

"We didn't attack very well, we clammed up and we were too nervy. Our defence was very strong, they got a try from an intercept. We're not a bad side on these last two performances, we're just too nervous and the guys have got to take it one game at a time."

Iain Grieve, who received a one-week club ban for a red card against Worcester last year, and Glen Townson were both sin-binned in the second half, and the coach was unhappy with the lack of discipline shown.

He does not believe that Sunday's win will provide any plus points for when the two teams meet again on Friday at the Memorial Ground.

"I don't think we take anything into it. Tuesday we'll get back to work and wipe the slate clean. I don't think you can carry any confidence into it, it's a new game and a new start."