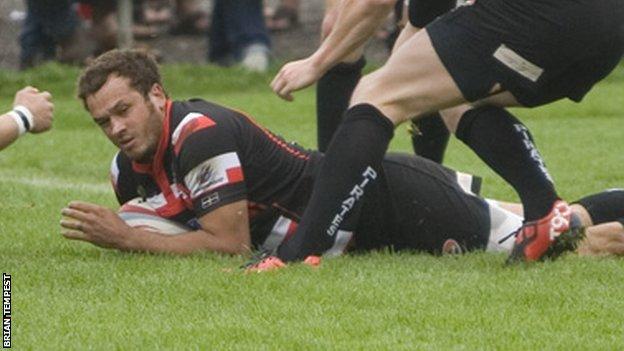 Cornish Pirates winger Wes Davies is hoping to be able to play again before the end of the season.

The 33-year-old has been out since October after rupturing his calf muscle in training.

The former Wales rugby league international re-joined the Pirates in 2009 after previously spending two seasons at the Mennaye from 2004.

"I'm not going to get too carried away, I'm setting myself a target of within three or four weeks," Davies said.

"I'm running at 90% but there's a lot more to it than running in straight lines," he told BBC Radio Cornwall.

"Hopefully we'll progress in the play-offs and there'll still be a bit of rugby left to play," added the former Wigan rugby league and Doncaster, Worcester and Orrell rugby union player.

The Pirates' backs division has been decimated by injuries this season, with extra players such as Canadian international Matt Evans and Andy Short being drafted in.

Davies made six starts for the Pirates in the Championship this season, scoring two tries.