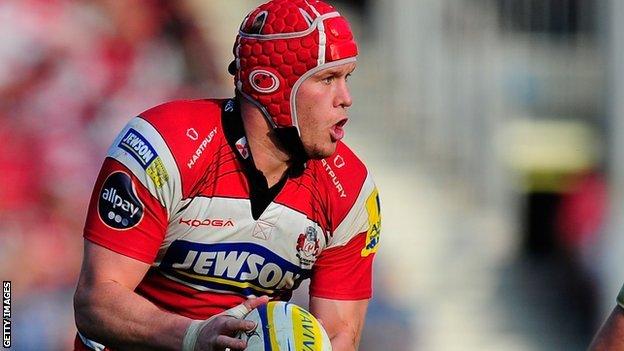 Gloucester captain Luke Narraway has conceded that a place in the play-offs is now out of reach.

The Cherry and Whites were edged out out 28-27 by Exeter on Saturday and now sit 10 points off fourth spot in the Premiership with only four games to go.

And back rower Narraway says they must now turn their attentions to securing a place in the Heineken Cup.

"We wanted top four but with the result (against Exeter) that's in the distance now," he told BBC Gloucestershire.

"The whole squad wants to put Gloucester in a position where they can be in the Heineken Cup next season.

"But we'll keep on clawing away and trying to improve to get us up the table as much as possible," said Narraway, who will join French club Perpignan next season.

Finishing in the top six in the Premiership this term should guarantee them a spot for next year, and head coach Bryan Redpath says his players must now prove they are worthy of that place

"We have to get our chins up," Redpath said. "We're going to struggle to get into the top four now so we need to fight for the top six.

"We made a mistake, we get on with it and we need to fight to get in the top six.