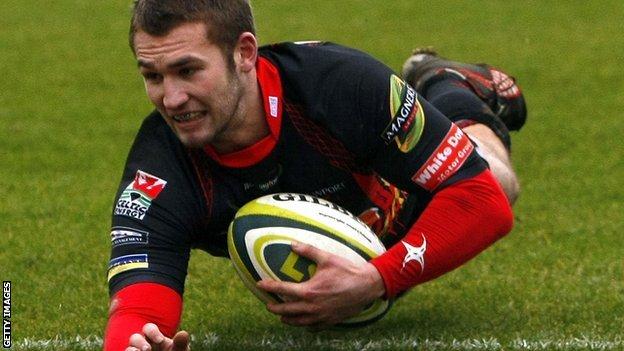 The 24-year-old turned down a new deal with the Welsh club to sign a one-year contract at Kingsholm, with the option of a further season.

"He's played consistently for the Dragons this year and we're fortunate to get him at the club."

Thomas, who has been capped at Sevens level by Wales, has made 82 appearances in six seasons with Newport.

His arrival at the Premiership club gives Gloucester options in the back line, following the long-term knee injury suffered by Olly Morgan.

Jonny May has been deputising in the role in recent weeks, but Redpath admits Thomas' ability as a specialist full-back is the main reason for bringing him to the club.

"We're aware that Olly Morgan has a long-term injury and Jonny May is still early in his development," added Redpath.

"The key part was that we knew he could fit into our system. He's played a lot of rugby this year and, playing a position like 15, you need to be playing every week.

"He gives us a genuine option in there and will challenge Olly when he returns to full fitness."

Speaking about his move to the Premiership, Thomas said: "I've played at Kingsholm twice in the last few seasons, once in the Heineken Cup and once in the LV= Cup. Although I was with the opposition, I couldn't help but be impressed by the matchday atmosphere.

"I've also watched a lot of Gloucester matches and they play a great brand of rugby, one that will certainly suit my game and I hope that I can add something to the squad.

"Talking to Bryan and hearing his plans for the future, I'm excited at the prospect of joining the club."