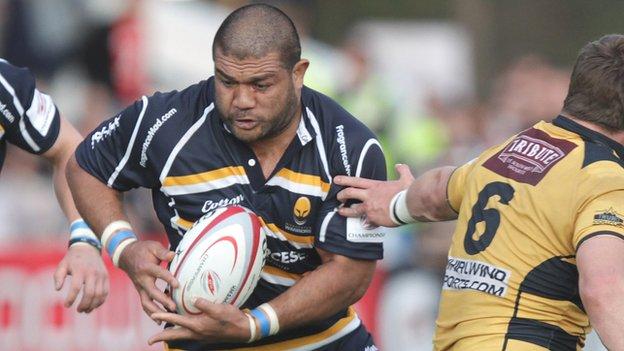 Head coach Richard Hill told BBC Hereford and Worcester: "The big man has signed for us which is fantastic news for the club.

"That completes our front-row plans with Rob O'Donnell and John Andress at tight-head."

Meanwhile, fellow forwards Oliver Tomaszczyk and Bruce Douglas are to leave, as is centre Alex Crockett.

Taumoepeau, 36, who is known to all at Sixways as "Dave", joined the Warriors in 2005 from French outfit Bourgoin.

"He is, in my view, still one of the top three best tight-head scrummagers in the Aviva Premiership," added Hill.

"He has one or two man-of-the-match awards this season, which is unusual for tight-head props but shows his importance to us.

"Tevita is now in better shape and playing better than when I first arrived.

"The conditioning staff have done a superb job to get him playing for 80 minutes. He keeps going and we see him carrying ball, he has improved his game."

Fellow props Douglass and Tomaszczyk both leave after two seasons at Sixways, while Crockett has already left the club after not being offered a new deal.

He missed virtually the whole season with a cruciate ligament injury.