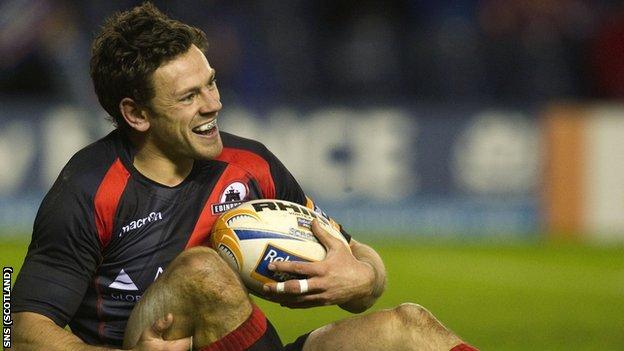 Centre De Luca has been with the capital side since leaving the defunct Border Reivers in 2007, while flanker Rennie joined as a youth in 2004.

Coach Michael Bradley said: "Both will play a key role in the bright future being pieced together at this club."

There's a lot of optimism about where we're going

The Irishman is delighted to have retained the services of 19 of what the club believe are their top performers for the next two seasons.

And Free State Cheetahs prop WP Nel and Northampton Saints back Greig Tonks are among the new faces set to join in the summer.

"It's fantastic news for Edinburgh Rugby that players of the calibre of Ross and Nick have committed these crucial years of their rugby careers to the club," said Bradley.

"They've played some tremendous rugby this season, showing the commitment, style and professionalism that we look to foster in all of our players here at Murrayfield."

Both players, who are likely to feature in Edinburgh's side for Friday's Pro12 visit by Scarlets, were out of contract in the summer.

"Our progress in the Heineken Cup has made this season a real landmark for even the most experienced players.

"Despite these highlights, it's clear to all the players that we have opportunities to improve as individuals and as a team, combining a committed group of players who are signing on to something special with exciting new arrivals in the seasons ahead."

Rennie was a nominee for the Six Nations player of the championship believes Edinburgh can progress further.

"Having grown up in Edinburgh, it means a lot to me to represent this club, so I'm delighted to have extended my contract and to have secured the chance to play for the club I grew up supporting," he said.

"Personally, I'm in a good place just now. I'm happy with the way I'm playing for both the club and Scotland.

"I've made these developments as a player at this club and I'm confident that this is the right place for me to continue to improve.

"There's definitely a different atmosphere around the club at the moment.

"There's a lot of optimism about where we're going and I'm looking forward to being a part of that future".