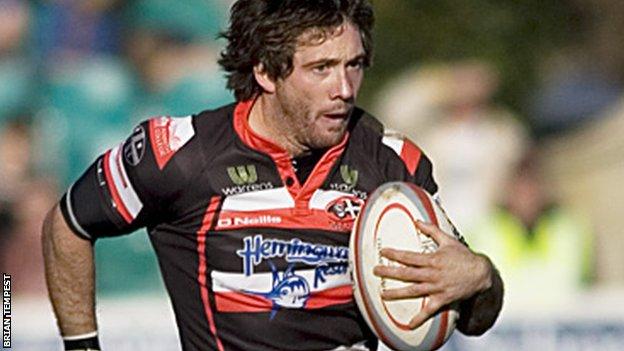 Cornish Pirates fly-half Jonny Bentley will not return to action this season.

The 25-year-old New Zealander came back from a pre-season abductor problem in October, but played just three times before hurting his Achilles.

Now Pirates boss Chris Stirling says Bentley, who had hoped to return before the end of the season, will have to wait until after the current campaign.

"There is light at the end of the tunnel for Jonny, but it's not going to be this season," he told BBC Cornwall.

"We're very lucky in the fact that Gordon Bosworth, who was here last year, and is now head of physiotherapy for the British athletics team for the Olympics, has managed to get Jonny to a couple of high-profile and high-calibre medical people," Stirling added.

Bentley's absence has led to Aaron Penberthy and Ceiron Thomas sharing the duties at fly-half this season, along with Exeter Chiefs loanee Myles Dorrian.

Thomas lost his place to Penberthy towards the end of the league campaign, but won his place back after the play-off draw at Leeds.

"Ceiron is definitely playing well and he's getting his confidence back," Stirling said.

"It's up to him now not to lose it because Aaron is sitting in the wings waiting."