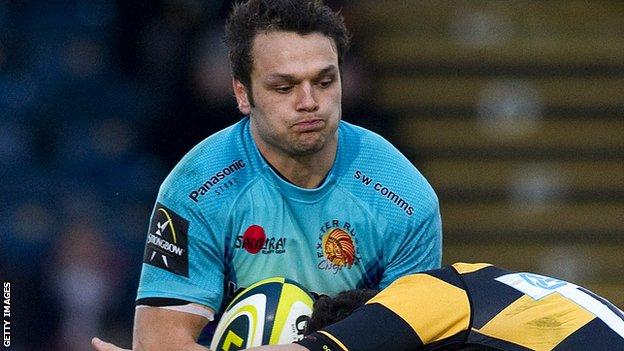 Exeter Chiefs back Phil Dollman says the club are good enough to make the Premiership play-offs.

The Chiefs are fifth in the table, three points off fourth-placed Northampton and a further three behind third-placed Leicester.

"We've got enough quality to challenge anyone in any league," Dollman told BBC South West.

"We're happy with what people are saying about us and as a team we are good enough to get there."

The 26-year-old Welshman has started Exeter's last five Premiership matches after struggling to establish himself in the team at the beginning of the season.

"I enjoy playing as much rugby as I can and it gives you that confidence as a player to be on a good run and getting lots of first team rugby," he added.

But with the likes of Sireli Naqelevuki,Josh Tatupu and Luke Arscott all starting to come back to full fitness, Dollman is aware that he must continue to play at his best.

"It's a massive challenge, everyone's chomping at the bit to have their say and be in the first team.

"Josh Tatupu's only a week or two away and Luke's obviously been integral to the side for the last two years, so I've got lots of competition and I've got to be on top of my game to hold my spot and hopefully I can do that this weekend," he concluded.