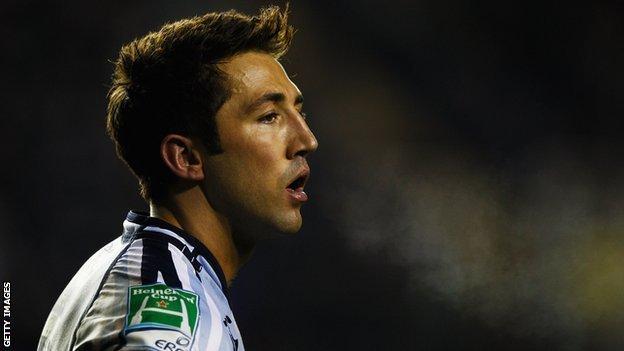 Gavin Henson has apologised for his "inexcusable", alcohol-fuelled behaviour during a flight on the morning after a Cardiff Blues game.

The Blues have suspended the player pending Monday morning "discussions" on what action they may take.

Henson said: "I have let my team mates, coaches, management, sponsors and indeed my family down with my actions.

"Drinking on that plane was inexcusable and I know that I must take responsibility for it."

Henson, 30, was a wing replacement in the 31-3 defeat by Glasgow on Friday.

In the game's wake, he admits to drinking alcohol on a night out and continuing to do so on the team's flight back to Cardiff on Saturday morning.

In a statement Henson said: "I would like to publicly apologise for drinking on that flight which is inappropriate behaviour.

"I admit I had been out drinking in Glasgow on the Friday night following our game against Glasgow Warriors and had stupidly carried on drinking on the flight, for which I am truly embarrassed about.

"I can see that drinking and behaving inappropriately on that flight as a professional sportsman at 7am has caused offence to members of the public, the Flybe Airline staff and passengers.

"I know that I have let my team mates, coaches, management, sponsors and indeed my family down with my actions.

"Drinking on that plane was inexcusable and I know that I must take responsibility for it.

"I also accept that in the light of this I need to learn from it and ensure this does not happen again.

"I am prepared to co-operate 100% with the Cardiff Blues' wishes and will do everything that I need to do in order to make amends and enable the Blues to focus on our biggest game of the season next weekend [at Leinster in the Heineken Cup].

"I remain fully focused and committed to Cardiff Blues and I hope they can accept my apology."

The airline Flybe said it was carrying out its own investigation.

A spokesman for Flybe said: "With regard to flight BE3431 from Glasgow to Cardiff on March 31, Flybe can confirm that it is gathering information from its own staff as well as those at both airports and will make no further comment at this time."

Henson signed an eight-month contract with the Blues in October after French side Toulon opted not to extend his deal with them at the end of last season.

A two-time Grand Slam winner with Wales, Henson has struggled to cement a regular place in club rugby since injuring his ankle in March 2009 and taking 18 months of unpaid leave from Ospreys five months later.

He joined Saracens in October 2010, but played only four games for the Premiership side before asking for his contract to be terminated to allow him to join Toulon.

Henson scored a try in a win over Stade Francais on his debut, and was briefly suspended for a breach of the club's disciplinary code before the punishment was lifted following an internal inquiry.

Since moving back to Wales, he has played eight matches and is yet to score a try.

His last international appearance was in Wales' 19-9 victory over England at the Millennium Stadium in August, but a wrist injury sustained in the game ended his hopes of playing in the World Cup.