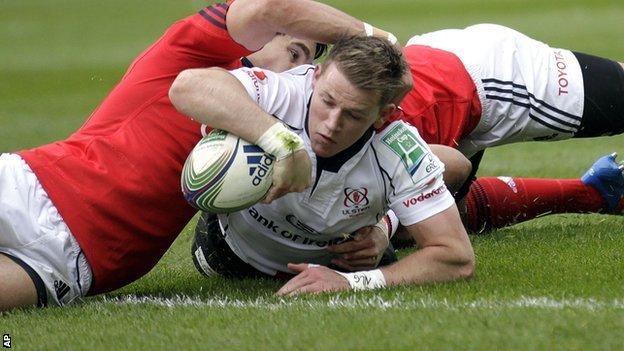 Munster hit back and Simon Zebo went over before Ronan O'Gara's penalty made it 19-10 at half-time.

O'Gara reduced the gap to six points and he added another penalty after Pienaar slotted over but Ulster held on to secure a semi-final with Edinburgh.

Ulster will face the Scots in the last four clash on Saturday, 28 April at the Aviva Stadium.

Ulster did not dominate possession but their clincal accuracy and finishing gave them a dream 19-0 lead after 32 minutes.

Munster infringements were ruthlessly punished, starting with two Pienaar penalties from his own half.

The try came on 16 minutes as Stefan Terblanche passed out wide to Gilroy, and the young winger broke three tackles to go over for a superb individual score.

Munster hit back on 34 minutes when Zebo touched down in the corner from Lifeimi Mafi's pass, and O'Gara converted from wide.

Ulster flanker Chris Henry was sin-binned after 37 minutes for slowing the ball and O'Gara closed the gap to nine by firing over a penalty with the final kick of the half.

Munster started the second half strongly with the extra man and O'Gara missed a penalty from out wide before easily slotting between the posts to make it 19-13.

The two-time champions piled on the pressure but they failed to capitalise and Ulster took advantage with a Pienaar penalty.

However, O'Gara hit back a minute later with his third penalty to restore the six-point deficit.

Ulster's defence repelled wave after wave of Munster attacks although they missed out when a Humphreys drop-goal attempt hit the woodwork.

Pienaar sent a penalty wide with four minutes left but the 1999 winners held firm to clinch a memorable victory.